A good drink at the proper time
has a welcome in every clime.

I’ve been collecting bartending manuals for a few years now, and for the most part I’ve managed to obtain either originals or reprints of some of the most influential and sought-after books on the topic. Still, there are a few major works that are very hard to find, and even when a stray copy turns up on eBay or Alibris, the price is frequently so outrageous that I can’t even consider buying it (today, for example, I saw several copies of David Embury’s The Fine Art of Mixing Drinks listed on bookfinder.com. Starting price? About $150.) 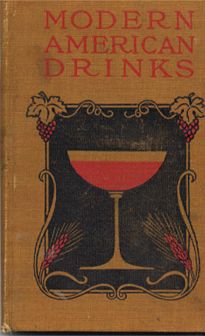 So it’s all the more satisfying when the odd reasonably priced original of a vintage, influential book appears out of the blue. Such is the case with the latest addition to my library, an original copy of George Kappeler’s Modern American Drinks from 1895.

I’ve read about Kappeler’s book for years–David Wondrich and Robert Hess have referred to it as the first printed reference for the Old Fashioned, and Ted Haigh mentioned it in Vintage Spirits & Forgotten Cocktails as the original reference for the Widow’s Kiss.

There’s no fluff or nonsense from Kappeler–this book is all drinks with no commentary or editorializing, from Absinthe, California-style and the Bosom Caresser to the Star Cocktail, the Whiskey Fix and the White Plush (though he does append a somewhat out-of-place chapter on “Frozen Beverages such as Water Ices, Sherbets, and Frozen Punches”).

I’ve only started flipping through the book, but I can see already why it has caught the interest of drink historians. With its many references to old Tom gin, pepsin bitters, calasaya and Horsford acid phosphate, Modern American Drinks illuminates a particular period in the evolution of the American cocktail.