A couple of months back, I received an e-mail with a simple, one-word subject line: “GIN!”

As you can imagine, I opened it immediately.

The gist of the message was that one of the local monthlies was planning an article on gin, and the editor wanted to invite me to participate in a gin-tasting panel the next day. My name entered the mix, apparently, based on this blog, and they approached me for the panel — no doubt after they’d been turned down by several more-qualified local bartenders, chefs, and food writers, along with other gin aficionados such as the guys who camp under the Alaskan Way viaduct. “Exposure! Publicity!” I thought. “Ah, who am I kidding — free gin!” I was in.

Anyway, the story is finally out, and I can finally mention the tasting (I’d been sworn to secrecy — blog-wise, at least — until the article was published). The panel included Robert Hess, of Drinkboy and MOTAC fame; bartender and wine manager Jason Crume, formerly of Lupa in New York and Bricco Della Regina Anna in Seattle; local oenophile Chris Nishiwaki; and myself, along with a gaggle of magazine staffers and interns (local food & wine writer Cynthia Nims also sat in on the panel for a short spell). Our task: to sample eight different gins in a blind tasting, starting with the spirits neat, at room temperature; then with a little cold water added to open up the flavor. The top four gins were then mixed in martinis (3:1 gin:vermouth, with a dash of Regan’s orange bitters) and in aviations, and presented to the panel. 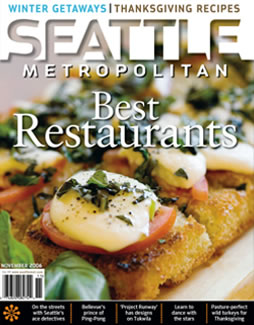 Blind tasting, especially in a group atmosphere, can be a bit nerve-wracking, with the potential for surprising and even embarassing results. I kept remembering the New York Times vodka tasting from 2005, when a group of experts tasting super-premium vodkas was tripped up by a joker who placed a bottle of Smirnoff in the mix, and the lowly Smirnoff proceeded to take the top marks. Gin presented an extra set of challenges, as it’s the one spirit in the liquor cabinet that most people (myself included) have rarely tasted neat. What if I spat caustic remarks about a sample, only to find out later that it was a swoon-worthy martini mixer like Old Raj; or praised a soft, citrusy gin, only to discover that it’s Seagrams? Tasting gin blind is like feeling your way through a dark room, and I found myself using whatever cues I could find to piece together an idea of what the gin would taste like when mixed in different cocktails.

But it all worked out okay; we tasted gins ranging from the familiar (Plymouth, Tanqueray, Hendricks) to the harder-to-find, mostly regional brands (Junipero, Aviation, Hamptons, Cascade Mountain, Desert Juniper). From my tasting notes, my top four (in order) were Junipero, Plymouth, Tanqueray and Hendricks; in a martini, Plymouth took my top vote, with Junipero, Tanqueray and Hendricks following behind, while in the aviation, the distinctive juniper notes of the Tanqueray made it stand out from (and above) the other gins in the pack.

The panel’s ratings were pretty similar to mine; I believe Plymouth took the top marks, with its soft, citrusy flavor; the long, licorous-like finish of the Junipero scared off some of the gin novices in the group, but it still came in near the top; Hendrick’s complex floral character was beguiling and very friendly; and Tanqueray’s ramrod-straight character made it the perfect example of what you expect a London dry gin to taste like. (My notes must differ from those of the organizers, as I had these four gins finishing top; in the article, Aviation takes the place of Tanqueray on the “panel favorite” spread).

Anyway, if you’re interested to read more about the tasting (and live in the Seattle area, or in a place that carries city magazines), the story is in the November issue.

(Oh, and the “almost, sort of” tag above? While I was mentioned and quoted in the story, this web site somehow didn’t make it into the piece (I was instead credited as “contributor to Mixologist: The Journal of the American Cocktail“). Well, you know about it, anyway.)

← Running a Tab
MxMo in the months to come →