I have a thing for weird, unobtainable booze. I’m also hardly alone — peruse the cocktail blogosphere, and you’ll find many other folks like me. There we are, sniffing around for violet liqueur and Swedish punsch, and embarking on major undertakings that are time and cost intensive — and sometimes in violation of state and federal statute — just so we can finally follow a drink recipe that was dug out of a bartender’s guide that went out of print before our respective parents were born. 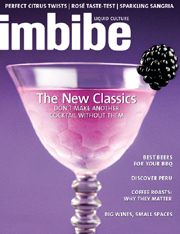 Why do we want this stuff? That’s the question I try to tackle in my story in the latest issue of Imbibe. Titled “Gone but not Forgotten” and beautifully photographed and designed — no, really, the story is freaking gorgeous — the article covers the pursuit of Batavia Arrack, Amer Picon, Falernum, Creme de Violette and Pimento Dram. As with other stories, one of the main perks of writing this piece was having the opportunity to get on the horn with folks like Ted Haigh, Chuck Taggart, Eric Seed and Jeffrey Morgenthaler, and to chat about cocktails and weird booze for a while. I also sat with Jamie Boudreau one afternoon and sampled his homemade Amer Picon substitute side-by-side with the authentic version (not surprisingly given Jamie’s talents, the replica was better, with a fuller, richer flavor that promises to work much better in cocktails than the watered down contemporary Picon). As a gesture of thanks for his efforts, I even gave Jamie credit for creation of the Chartreuse Swizzle, a remarkable and powerful drink that apparently has its provenance elsewhere (sorry, Marcovaldo).

I’m sure some folks are thinking, “If these things are impossible to find, why should I care?” Mainly because for many of these ingredients, finding them isn’t so impossible anymore. Look at absinthe (not covered in the article, but still one of those must-have-but-can’t-easily-find ingredients): a year ago, you had to be willing to bend the law and make your credit card whimper in order to obtain a decent bottle of the stuff; now, you can pick up a bottle at your local liquor store (if you live in New York), or easily, legally and somewhat-affordably get one online.

More pertinent examples, perhaps, are creme de violette and Batavia arrack: violette is one of those near-impossible-to-get ingredients that only a lucky few have, thanks mainly to traveling friends who hit liquor stores in Japan or France (thanks again, Chris! And thanks for the refill, Darren). Batavia arrack — rum’s ancestor, the base to arrack punch and the long-lost Swedish punsch — is perhaps even harder to find, squirreled away in dusty old shops in Germany and the Netherlands, or brought back from Indonesia.

Now (soon, anyway), both of these are at hand: thanks to Eric Seed, an esoteric-spirits aficionado and incredibly nice guy who is principal at Haus Alpenz, these products are back in the United States; I don’t think they’re in stores just yet (Eric, help me out here if that’s not the case), but they’re in a warehouse somewhere in New Jersey about to be loaded on a truck bound for your finest liquor stores, where they’ll wait until some of your more dedicated New York cocktail geeks grab a bottle and swoon.

And that’s not all, but that’s all I’ll say for now. Want more info? Then head for Tales of the Cocktail, where a panel will discuss “Lost Ingredients” on Thursday, July 19. Panel participants include Ted Haigh, Chuck Taggart, Eric Seed and myself, along with several other notables, and we’ll discuss several of the spirits mentioned in the Imbibe story, along with a few more. Surprising announcements and great excitement guaranteed.

← The Cocktail Chronicles Sells Out!
MxMo XVII: Bring on the Blog Love →