There I was, Friday night, getting ready to mix up a drink and then, as the time crept closer to midnight, blog the hell out of it in a frenzy so I could keep up with the 30-day, daily post regimen I set for myself a couple weeks back. This being Friday, I figured I might mix a few; the East India was on my list, but there was another drink I wanted to give a spin: the Ephemeral.

I did, and it was good, and I took photos (albeit poorly lit ones) and everything, but before blogging it up, I thought, “What’s the rush? Let me take care of the East India, which I’ve been planning on getting around to, and once that’s out of the way I can mosey back over to this little number. After all, the only place I’ve seen this recipe posted is on Facebook [and yes, I feel more than a little like a 14-year-old girl while typing that], in an update from David Shenaut; it’s not like this is gonna pop up on the Internet anywhere in the next few days.”

What I didn’t count on, of course, is that Chuck Taggart would have the very same impulse to mix up this intriguing drink, and would get it online while I was still mucking about in the kitchen. But while Chuck and Wes may have scooped me on getting this drink posted first, it deserves the extra coverage. 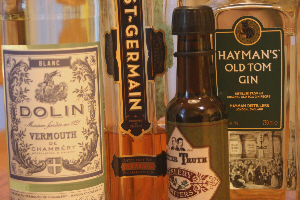 David is a bartender at Teardrop Lounge in Portland, and when I had the bottles assembled on the table for a quick photo, I realized that this cocktail has all the hallmarks of booze-geek nirvana: Dolin Blanc, the current vermouth of the moment (and a few years ago, did anyone think that there would ever be such a thing as a vermouth of the moment?), Old Tom gin, The Bitter Truth Celery Bitters — hell, the most mainstream ingredient in the mix is St. Germain.

The Ephemeral is just that — lightly sweet, with botanicals hitting all ranges of the palate, from the lightness of elderflowers to the crisp savory flavor from the celery bitters to the deep softness of the gin. Like Chuck, I used the Hayman’s Old Tom in this as it’s what I have on hand; though having tasted the Ransom Old Tom I’d like to give it a run through the Ephemeral, as it’s on the drier, richer side of the Old Tom experience.

Anyway, nice job, Dave, and thanks a hell of a lot, Chuck, for beating me to the punch with this drink.

Combine ingredients in a mixing glass and stir well with cracked ice. Strain into chilled cocktail glass, squeeze a piece of grapefruit peel over the drink and use as garnish.