I love the Appletini.

Mind you, I’ve never actually had one — not a “real” one, anyway, assuming you can call a drink that’s become an icon of all that’s saccharine and false about cocktails “real.” Even when I was younger and (more) stupid, when I was less picky about what went into my glass, a drink that both looked and tasted like Jolly Ranchers just seemed to be wrong, not only a fraudulent fake of a proper cocktail, but yet one more molestation of a natural flavor.

But as someone who makes his living writing about drinks, the Appletini has been a godsend, a useful tool for mocking all that’s wrong with bars, and an instrument of warning to those who are tempted to take the quick, easy way out. Plus, with the drink’s pioneering appropriation of the ‘tini suffix, the Appletini became a punchline in itself, a gaudy green scapegoat in a cocktail glass for craptinis everywhere. Long may it wave.

There’s a problem here, though. Y’see, for all its faults, an Appletini has one thing going for it: it tastes decent to a lot of people (so I assume — again, I’ve never had one, but it’s easy to come to that conclusion) — and why not? It tastes like apples (kinda, or at least what apples taste like as interpreted by food scientists), and apples are awesome. Even spirits actually made from apples don’t really, truly taste like apples (except on a certain ethereal, completely engaging level), thanks mostly to the effects of barrel aging — not that I’m complaining, of course. But, apples — why not? If you can take a drink that’s emblematic of all that’s fake in mixology, and render it in a natural way, isn’t that a worthwhile cause (or at least a potentially interesting way of spending a Monday evening)?

Fortunately, today is Mixology Monday, and as this month’s host Jacob Grier chose to frame it, this month’s event is themed “Retro Redemption.” Jacob’s challenge is to take a misbegotten concoction, preferably from recent decades, and tweak it into something appealing to the growing craft-cocktail crowd. And if ever a drink needed tweaking, it’s the Appletini.

So, here’s how I’m going to proceed: I’m going to take the Appletini at its most literal, and break it down by the constituent parts of its name — first, it has to have an apple influence; and second, it has to earn that ‘tini suffix.

My starting ground rule is that the drink’s base elements must be gin (vodka? really? are you in the right place?) and dry vermouth; bonus points if the orange bitters stay in the equation. And for the apple? It must be a natural component, something from an actual apple, not a mock-up of apple flavor or a processed apple product. Simply adding an ounce of apple juice or the like to the drink would be cheating on a certain level — my self-imposed rule stipulates that the drink must still be identifiable as a martini — but what if I process the drink through an apple?

We know from experience that apples and dry vermouth work fantastic together, as demonstrated in Audrey Saunders’ Eve — a simple five-day infusion of Macintosh apples in vermouth. Had I given this project much thought prior to the last couple of days, I might’ve smacked a bottle together, but by the time I started thinking about the apple + martini project earlier today, the infusion ship had sailed. 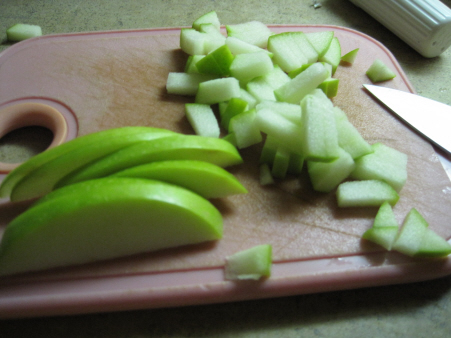 Or had it? No, I didn’t have five days for an infusion, but I had a few minutes — not to mention a couple of Granny Smith apples and an iSi cream whipper, which, by following the nitrogen infusion process first explored by Dave Arnold, was all I needed to do a flash-infusion of apples into my drink, and which hopefully would only bring the delicate, fruity notes of the fruit, without the darker, bitter flavors that come from oxidizing apples.

Okay, this post is way too chatty by this point — let’s get down to the recipe: 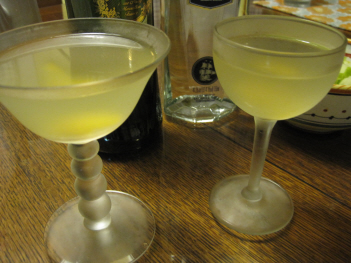 This worked out better than expected. The liquid went into the canister a light straw color (from the vermouth), and came out a delicate, chlorophyll green. At first sip, the apple was barely noticable — it was all martini, with a softer, rounder edge.

But after the liquid rested a bit more, the apple flavor developed; the drink was still no fucking doubt a martini, but it had a lightly floral aroma, and a lingering finish that was had the bright, acidic crispness and the very gentle sweetness of a fresh Granny Smith apple. You wouldn’t sip this drink and have “apple” immediately leap to mind, but the fruit gradually manifested itself as a welcome addition to the martini’s familiar flavor — as though the bright freshness of the fruit was one of the botanicals in the gin or the vermouth, pronounced enough to be identifiable as a flavor, and definitely lending a soft, fruity caress to the drink, but not attempting to seize control of the drink’s character from its spirituous base elements.

Does it taste like a “real” Appletini? Hell, no. That’s why I’m still drinking it…

Anyway, that’s my MxMo contribution for this month. Head over to Jacob’s place and see what others have got up to for this round.