It’s not an exaggeration to say that if it weren’t for Murray Stenson, my career, and my life, would be disappointingly different. 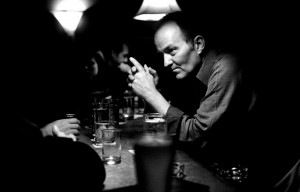 A longtime Seattle bartender — most recently at Canon, and for much of the decade before that, at Zig Zag Cafe — Murray first got in touch with me in the summer of 2005, when this blog was only a couple of months old and my readership numbered, maybe, five cocktail-centric individuals with questionable taste in Internet browsing. Murray had stumbled across my blog via a comment I’d left on Chuck Taggart’s site, and invited me to come down to Zig Zag to geek out a bit about cocktails.

I did, and we did, and really, nothing’s been the same for me since.

Type “Murray” in the search window to your right and several pages of results will come up, with good reason: in the more than seven years that have passed since our first encounter, I’ve sat across the bar from Murray Stenson more than I have any other individual bartender on earth. During that time, he taught me about cocktails and spirits and all the assorted mechanics of mixology, but more importantly, he taught me how all this stuff isn’t what really matters.

Over the years, as I sat on a barstool across from Murray, he might occasionally mention a drink I wrote about on this blog or, more frequently, would introduce me to an obscure oldie that I’d then run home and blog about. But the blog post Murray remarked about more than any other was one from 2006 that had absolutely nothing to do with cocktails and absolutely everything to do with those sparkling, magic moments that happen when friends, acquaintances and strangers are all together in the unique social environment of the bar.

Without Murray, this blog would be depressingly flat. Without Murray, my skill — and my career — as a drinks writer would be weaker. Without Murray, my Wednesday evenings — which for years were (and to a certain extent, still are) my regular nights at Zig Zag — wouldn’t have been one of the highlights of my weekly calendar; they would have been, well, Wednesdays — the blandest night of the week.

Over the years, Murray demonstrated his endless patience with me, not just by tolerating my incessant cocktail-geek questions, but by putting up with me as I started bugging him with questions for articles I was writing. I used Murray as a source many times — for Imbibe, for the San Francisco Chronicle, and probably for stories I’ve forgotten ever writing. Over time, I shoved him more into my journalistic spotlight, as I did in profiles of Murray for Imbibe and for Shake/Stir, and in an essay I wrote in 2009 for the New York Times.

This is all to say that Murray’s given me a lot. And if you’re at all interested in cocktails and bars — and really, why are reading this blog if you’re not? — then he’s given you a lot, too, because this story I’m sharing about how Murray’s influenced me can be echoed by dozens of bartenders, bloggers, cocktail enthusiasts and others who enjoy relaxing in a bar, not only in Seattle but around the world, as well.

Now, it’s time to give something back to Murray.

Here’s the scoop: Murray has a heart condition, and may require intensive surgery. As with bartenders everywhere, Murray doesn’t have medical insurance, and he’s unable to work while incapacitated with this condition. Evan Wallace, a longtime friend of Murray’s, set up a MurrayAid page on Facebook, where people like me and you (hint, hint) can make a donation via PayPal to help defray Murray’s medical expenses. UPDATE: There’s now a website for the coordinated efforts to help Murray: murrayaid.org. Also, donating directly through PayPal, as described on the website, ensures your full donation will go to help Murray, without Facebook taking a cut.

Here’s what you can do:

Murray’s done so much for the cocktail community over the years, and as I blathered above, he’s done a lot for me. Let’s help him out in this time of need.