Nearly six months after Lucid’s debut, the mainstream media is still slowly cluing in to the fact that absinthe is legally available in the U.S.; now, if they’d stop trotting out the tired Belle Epoque exaggerated stories and quit relying on interns to put together the bullet points that invariably read “ABSINTHE WILL MAKE YOU CRAZY!,” we’d be making real progress.

But while Lucid continues to attract attention, last week another absinthe debuted in the U.S., to much less fanfare. That’s too bad — because the absinthe’s pretty good.

Kubler is a Swiss absinthe, commercially produced in Val-de-Travers ever since Switzerland lifted the ban on absinthe in 2001. Unlike Lucid, Kubler is a blanche — meaning it is clear in color, and has a somewhat more subdued, mellow flavor — though also unlike Lucid, Kubler has a bit more of a forward anise note. It’s also lighter in alcohol content — though when you’re talking about something that’s 106 proof, “lighter” is a relative concept. Finally, like Lucid, Kubler is available for online purchase; DrinkUpNY currently has a deal for $51.99 for a liter of Kubler, with free shipping (compare that to $62.99 for a 750ml of Lucid).

I just louched my first glass of the Kubler, and I’m enjoying what I’m tasting. Sure, it’s not as complex or robust as some absinthes, but it’s a very pleasant drink — light in flavor without being shy, and with a nice, creamy mouthfeel. Not bad for a second round — I can’t wait to see what comes next. 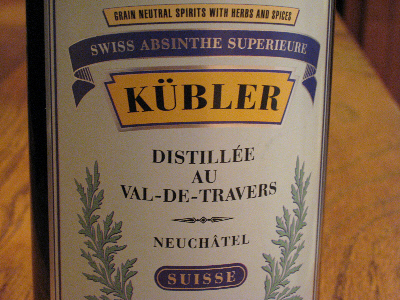 3 Responses to Second Round