I’m prone to exaggeration from time to time, but I say with all seriousness that the results of this round of Mixology Monday — hosted by Stevi at Two at the Most, with the theme Guilty Pleasures — may truly frighten me. But not for the uppity reasons you might expect from a card-carrying cocktail snob such as me; no, rather than sneering disdainfully at many of the drinks that are suggested (okay, I’m sure I’ll sneer at a few of them), I fear that some primal sugar-and-booze element in me may covet a few of those cocktails, and add them to my own list of shameful libations.

Though I also have to admit that I’m much the booze snob I come off as; my formative alcohol years were built more around cheap beer and wine rather than the harder stuff, and I managed to make it through college and my 20s without ever having an Irish Car Bomb, a Red-Headed Slut, or many of the other mixological monstrosities we bolgers o’ the booze rail about the other 364 days of the year (though I do have to admit that as someone who came of age in the ’80s, I did tip a few Bartles & Jaymes wine coolers along with a Fuzzy Navel or two, and while working nights at a record store during my senior year I found myself enamored with the compact horsepower of a Long Island Iced Tea ordered in that slim window between the time I got off work and last call).

Today, I don’t dip in that pond very often. A notable though unseasonal exception takes place around the holidays. I’ll find myself bored and lazy some night, and snag the carton of eggnog I bought for my kids out of the fridge and pour myself a cup, then fortify it with a hearty dose of Myers Dark, which thins it out enough so that all that cholesterol and saturated fat will pass through my system without clogging an artery anywhere, or so I tell myself while I’m drinking it. I usually don’t care for the Myers Dark all that much, but there’s some kind of alchemy with that carageenan-thickened stuff from Organic Valley, and it keeps me happy until that queasy feeling of having eaten an entire cheesecake starts to come over me. 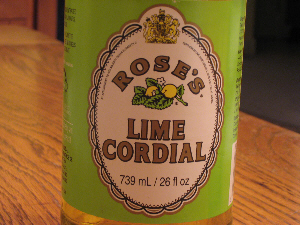 Otherwise, it’s pretty much Rittenhouse and Carpano Antica all the time — except when I’m feeling like slumming, and that’s when I reach for the cocktail that got me started on this whole thing several years ago: the Gimlet.

The gimlet isn’t exactly a guilty pleasure — it’s got bonafides as a genuine classic, and as long as you don’t mix it the Raymond Chandler way, you’re not hitting it with a huge dose of sugar. But here’s why I’m including it for this theme:

Yes, vodka. While I’m not swilling the vanilla stuff out of the freezer like Darcy, or swapping shots of it with those of Jaeger like Jeffrey, I think vodka has an occasional role in the bar, and for me, a big chunk of its role (discounting its utility as an infusing medium) is in mixing gimlets. I was first introduced to gimlets by a column in the New York Times by William Hamilton, and I took my vodka-wielding approach based on Hamilton’s thoughtful assessment:

I prefer vodka, for its understatement. Gin talks too much, with its juniper bush-berry accent. And what you want, as everyone knows, is a drinking companion who listens. 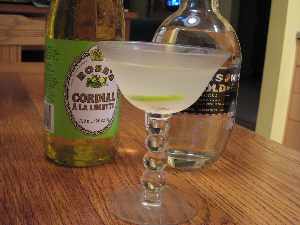 Even after I came to appreciate gin and found vodka lackluster, and after I embraced the freshness mantra and disdained prepared mixers such as Rose’s, I still loved gimlets. They’re not fancy, and that fits their mood perfectly — this is a slumming drink, a cocktail that you mix when the day’s been a bit grim and you need to reassess. Such is my love for the gimlet that I spent way more time and effort than I should have putting together a study of the drink for the premiere issue of Mixologist: The Journal of the American Cocktail

, and learned way more about Rose’s Lime Juice than any one person should know.

I don’t drink gimlets that often nowadays — not a change of heart, just absent-mindedness — but thanks to the seemingly endless stream of vodka that comes into the house in sample packages (along with that family-size bottle of Rose’s cordial I picked up in Canada a while back), when the mood hits, I’m more than ready.

Shake well with ice and strain into chilled cocktail glass. Garnish with a lime wedge.

That’s it for Mixology Monday — head on over to Stevi’s place to see what everyone else came up with, and prepare to be astounded and probably a little bit ashamed.