Before I screw anything up with a mangled literary reference, let me get this out of the way at the beginning: I never read David Copperfield

Oliver Twist? Sure, a couple of times. A Tale of Two Cities? Certainly, though not so recently that I can recall much of the story. A Christmas Carol? Hell yeah — as recently as last Christmas. But way back in college, when I was skinny and had hair, I flirted with the idea of majoring in English, only to recoil from the subject during my sophomore year after a sudden and brutish encounter with mid-19th century English novelists (nothing against them, really — it just wasn’t my thing back then; if anything I was even more masochistic, given to forcing myself through Ulysses for the fun of it). I can’t blame David Copperfield directly, though I do recall weighing its heft in a university bookstore one afternoon, then placing it back on the shelf before going rummaging for some Nabokov.

What does this have to do with anything, much less Mixology Monday (which is hosted this month by Craig at Tiki Drinks and Indigo Firmaments, with the chosen topic of Spice)? Well, in my last-minute digging through drink books for a suitable concoction that could be assembled on the fly — sorry, very poor planning around here — I picked up a book that I’d been meaning to introduce during the Christmas season: Drinking with Dickens 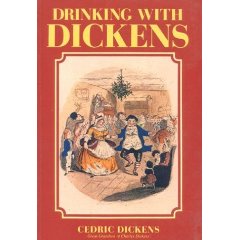 Written by the author’s great-grandson Cedric and first published in 1980, Drinking with Dickens is a fun little breeze through the author’s works, touching on characters and story lines associated with alcohol. While there are suitable spice-laden punches such as a Christmas Punch (somewhat similar to the recipe I list), what caught my eye was this: simply listed as “Gin Punch“, and noted as “Mr. Micawber’s favorite.”

Gin was no stranger to Dickens, nor to his mid-19th century world. The “Gin Craze

” had swept London a century before, and gin was still a staple spirit for the lower, working classes, and mixing it in punch, whether hot or cold, was a not unusual method of consumption. In A Christmas Carol, fuddleduddy Bob Cratchit returns home after his rude encounter with Scrooge to compound “some hot mixture in a jug with gin and lemons, and [he] stirred it round and round and put it on the hob to simmer.”

Cedric Dickens notes that Mr. Micawber, a luckless yet perpetually optimistic character in David Copperfield based on the author’s father (thanks, Wikipedia!), also had a great fondness for gin punch. After one trying disappointment, Micawber goes to prepare some:

His recent despondency, not to say despair, was gone in a moment. I never saw a man so thoroughly enjoy himself amid the fragrance of lemon-peel and sugar, the odour of burning spirit, and the steam of boiling water, as Mr Micawber did that afternoon. It was wonderful to see his face shining at us out of a thin cloud of these delicate fumes, as he stirred, and mixed, and tasted, and looked as if he were making, instead of a punch, a fortune for his family down to the latest posterity.

Hey, punch as a fortune — I can get into that.

Ignoring the fact that the author’s recipes are sometimes suspect — Cedric Dickens never really reveals where he sourced them, and there’s a slapdash element to some — and that my own experiments with drinks of yore have occasionally resulted in spectacular failure, I decided to give this Gin Punch a crack. Here’s the recipe I’m working with, from Drinking with Dickens:

Into a warm tumbler put the juice of half a lemon, the cinnamon and clove, and the sugar and honey. Threequarters fill the glass with boiling water, add the madeira and gin and stir with a stick of cinnamon. Grate nutmeg thereon and drink quickly.

I’m choosing to ignore the “dry gin” reference in favor of a fuller-flavored and perhaps more historically appropriate genever, so Bols Genever is my gin of choice in this drink (and speaking of gin, during my Google-driven Micawber research I discovered that in the 1935 film version of David Copperfield, Micawber was played by W.C. Fields).

I’d post a photo, except my camera recently gave up the ghost and has yet to be replaced, so you’ll have to make due with this description: Okay, that’s weird. It’s not bad, definitely not, but the malty funkiness of the genever and the richness of the madeira — along with the little quibbles around the edges from the cinnamon, nutmeg and clove — combine to produce a flavor that nobody this century, or last, would likely have come up with.

It’s frigid and icy in Seattle, so a drink like this is not undesired on a night such as this one. I’m not sure if I’ll venture back down this exact path, but there’s room here for tinkering; Micawber’s gin punch is wanting, but there is hope in it for future experimentation.

So that’s what I got — the spice is relatively meager, but it sounded like a good idea at the time and I hope I get points for being adventurous enough to drink hot gin. Head on over to Craig’s joint to see what everyone else is up to.

5 Responses to MxMo XXXIV: In which the author swills hot gin