The preparation ritual required to mix a two-tone Princeton Cocktail certainly does it no favors in the comeback department. Then again, this is an era in which many drinkers don’t think twice about ordering a round of scratch mojitos in a packed bar at 11pm on a Friday night, so who’s to say — maybe the Princeton has a future ahead of it. 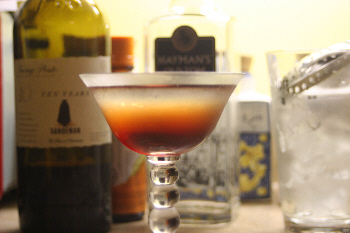 As well it should: c’mon, gin, port, orange bitters — what’s not to like? It has the appropriate degree of old-timeyness (Kappeler, 1895) to give it some cocktail-geek street-cred (and that Old Tom flag on the gin doesn’t hurt), and it just tastes good as hell. If you’ve got a hand-wobble that disqualifies you from both brain surgery and from constructing pousse cafes, you may make a mess of this one initially, but fortunately the heaviness of the port pulls it to the bottom of the glass, so slop away — the Princeton is (relatively) forgiving.

A quick word on the recipe: in Imbibe!

, Mr. Wondrich suggests using Plymouth and a dab of simple syrup if Old Tom gin is not at hand, so there’s that option out there; for mine, I used the Hayman’s Old Tom as it’s the only one in the house, but I look forward to giving this a go with the Ransom Old Tom at some point.

Stir gin and bitters well with cracked ice and strain into chilled cocktail glass. Carefully pour the port down the side of the glass, allowing it to settle in the bottom of the glass for a nice two-tone effect. Lemon or orange zest over the top? Well, why not…..