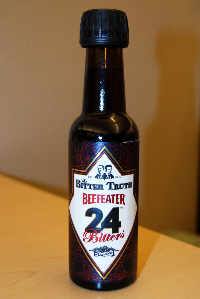 Sure — I’ll play along with Dietsch’s “Don’t Be Bitter” contest. After all, the gentlemen from The Bitter Truth have supplied some of the best bitters in my liquor cabinet, and the opportunity to win a bottle of their Beefeater 24 Bitters — which apparently aren’t for sale — is too good to pass up.

According to Dietsch’s rules, to enter the contest I have to blog about another drink blogger who inspires a sense of bitterness in my jaded soul. Oh, but where to start — I could express bitterness that Jimmy Patrick has let Jimmy’s Cocktail Hour go to pasture, but how can you feel bitter about a guy who drunkenly nuzzles your neck at Heaven’s Dog after Whiskyfest? And how about guys like Rick and Jamie, who shoot better photos for their blogs than I ever will, despite the nifty camera I’ve been playing with for the better part of a year but still can’t seem to figure out? Possibly…. But when it comes down to true envy, there’s one cocktail blogger that keeps coming to mind: 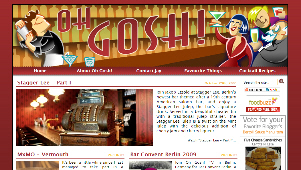 What got this rolling is that on at least three occasions in the past year, I’ve been on the edge of shaking off my laziness long enough to blog about a tasty new drink I just tried only to notice that, DAMMIT, Jay just posted the drink I was about to cover. Need more reasons? Oh look! Jay conducted a tasting of Old Tom gins, including a variety unavailable outside London — and look! Jay’s going to European bar shows, and visiting Le Lion and a host of bars in the UK, France and Germany that I’m dying to visit but so far have not had the opportunity — oh, and there’s also Jay’s online videos about assorted aspects of the world of mixology, not to mention his skills as a photographer that make my blog, in comparison, look like I’m shooting everything with the beat-up Brownie I started with as a kid. And then, to top it all off, Jay just has to screw up my need to be bitter by being a genuinely nice guy. I just can’t win.

Anyway, hats off to Jay for his excellent blog, and thanks to Dietsch for putting this bitters challenge together. And if you want to see true bitterness, just check on my mood if I don’t win this contest……

← MxMo Vermouth: The flower with the power
An Evening of Holiday Drinks, November 16 →

One Response to Don’t Be Bitter