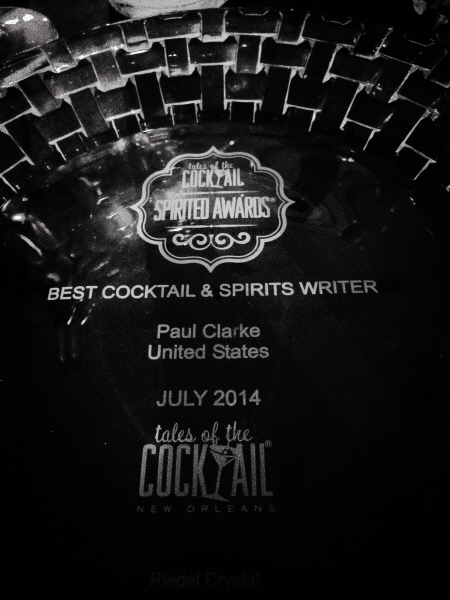 None of this could have happened if a few folks hadn’t read those early posts and responded in a favorable way, encouraging me to keep writing and to take what started as a hobby and turn it into a career. I’ve lost touch with some of those early readers — my first commenter was “C” at Slakethirst, a long-defunct drink blog based in Portland, who astonished me not only with his helpful suggestions, but with the realization that somebody had actually *read* the stuff I was posting — but many othersÂ I still see or hear from via Facebook on at least a semi-regular basis. Gradually, as word got around that some lunatic was posting old drink recipes and commentary online (at least in those early years — this blog has grown a bit dusty with disuse), I was surprised to come across bartenders, distillers and other writers from around the world — as well as a vast number of civilians who simply enjoy a good drink — who had strayed across the Cocktail Chronicles, and stuck around to see what else I might do. Today I’m humbled and honored by the recognition I’ve received, and raise a glass in tribute to all who’ve encouraged me to keep going.

Anyway, thanks, everybody — I appreciate all the support over the years that hasÂ made this ridiculous career of mine possible.