A couple of months ago, I wrote about an essay at Lost Magazine by a writer named Wayne Curtis, about a cocktail very dear to my heart, the El Presidente (or should that just be “El Presidente?” I never remember the protocol). Well, Curtis has a book coming out next week entitled And a Bottle of Rum: A History of the New World in Ten Cocktails, and, thanks to the review copy I received in the mail, I’m proud to have gotten a jump on everyone else in digging into the latest volume of booze-oriented scholarship. 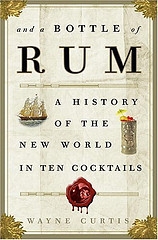 Almost everyone, anyway. The New York Times beat me to the punch a week or so ago, with Jonathan Miles’ writeup in the “Shaken and Stirred” column of a visit to Pegu Club, where Audrey Saunders mixed him a bombo, one of the 10 cocktails alluded to in the title (Miles’ verdict: the bombo is a bust). Plus, the blurbs on the back cover are from Ted Haigh, Dale DeGroff and Jeff “Beachbum” Berry, so that puts me another rung down the ladder of the first-to-reads. But I’m still glad to have a copy of the book in hand, if for no other reason than it gives me bragging rights that I’ve been in the first wave of cocktail geeks to dig into the finest narrative overview of spirits and cocktails since William Grimes’ Straight Up or On the Rocks: The Story of the American Cocktail.

Though Curtis doesn’t aim for the whole shebang, like Grimes did — instead, as the title implies, this book is all about rum. As Curtis writes in the introduction,

Rum is the history of America in a glass. It was invented by New World colonists for New World colonists. In the early colonies, it was a vital part of the economic and cultural life of the cities and villages alike, and it soon became an actor in the political life.

Rum embodies America’s laissez-faire attitude: It is whatever it wants to be. There have never been strict guidelines for making it. There’s no international oversight board, and its taste and production varies widely, leaving the market to sort out favorites. If sugarcane or its by-products are involved in the distillation process, you can call it rum. Rum is the melting pot of spirits — the only liquor available in clear, amber, or black variations.

And a Bottle of Rum covers rum’s rough early days, when it helped bolster burgeoning economies in Jamaica and, especially, Barbados (among the terms for intoxication printed by Benjamin Franklin are “crump-footed,” “staggerish” and “Been to Barbados”), fortified British sailors and pirates (Blackbeard favored tumblers of a cocktail made with flaming rum and gunpowder), became part of the infamous (and somewhat mythical, as Curtis explains) triangle trade of rum and slaves, and appeared prominently on the bill of fare for virtually every inn and tavern in the young American republic. Curtis also points out oddities in the modern history of rum — for example, how one of today’s top-selling rums is named after the Welsh-born privateer Henry Morgan, whose MO with wealthy captives included the victims

[being] stretched on the rack, or [having] flaming sticks tied between their fingers, or a cord twisted around their heads so tightly that their eyeballs popped like grapes from their skins. […] Some had their feet burned off while still alive; others were said to be suspended by their testicles and battered with sticks until a violent anatomical separation ensued.

Think about that the next time you’re tempted to order a Captain and cola.

Curtis also covers rum’s versatility as a mixing liquor — no wonder, given the industrial harshness of the spirit’s early ancestor — and covers pre-Jerry Thomas concoctions such as grog, punch and flip, as well as the sling, the mimbo, the afore-mentioned bombo (rum, molasses, water and nutmeg), cherry bounce, bilberry dram, syllabub, switchel, sampson and calibogus. Further on, he tackles the daiquiri and the legacy of El Floridita, Hemingway’s endless thirst for frozen rum drinks (house record at El Floridita: 16 daiquiris in one sitting), the debate over the Bacardi cocktail that continues to this day (just venture over to the Drinkboy forum for proof), and the rise of rum and coke, mojitos, and the whole tiki experience. And, as should be expected from any comprehensive overview of a particular spirit, Curtis also tosses in a final chapter containing the recipes for 30 rum-based cocktails.

If I’m glossing over a lot of things, it’s because I’m still not quite halfway through the book — it’s been another busy week — but so enamored am I of Curtis’ approach to rum that I wanted to make sure I got a post up about this book before I leave town on Wednesday, and will be focusing (and, hopefully, posting) on other things.

So, click away — head on over to Amazon or Powells and advance order a copy of And a Bottle of Rum, and while you’re at it, stop by Wayne’s blog, Republic of Rum, where he chronicles his continuing adventures with this native spirit. Don’t make me send Captain Morgan after you…..

One Response to And a Bottle of Rum