In case I hadn’t mentioned it — and I hadn’t, as I never assume I’ll be doing anything until I’m actually doing it — I’m spending the next few days in New Orleans, attending Tales of the Cocktail, a four-day series of seminars and events focusing on the history and significance of the cocktail. And after just a few hours, my initial verdict is:

I am such a fucking geek.

OK, it’s New Orleans, capital of music, culture, culinary wonders, and everything else that’s great (and obscene) about America, and what have I gotten worked up about today? 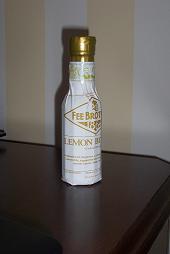 meeting Joe Fee — as in Fee Brothers’ Bitters — in the elevator as soon as I got into town, having him ask me “Are you into cocktails?” (that’s like asking a little kid “would you like to see a puppy?”), then hand me a bottle of the new Lemon Bitters that Fee’s is rolling out in the near future.

* going down to the Carousel Bar at the Hotel Monteleone, where I’m staying, then trying to keep pace with Phil Greene (descendant of Antoine Peychaud and co-founder of the Museum of the American Cocktail) as the bar spins, then finally sitting down and striking up a conversation with the person sitting next to me, who turns out to be Jeff “Beachbum” Berry, and having an incredible hour-long discussion about tiki drinks with him before–

* hopping off the carousel bar — it really does get disorienting after a couple of rounds — and literally bumping into Ted “Dr. Cocktail” Haigh, Robert “Drinkboy” Hess, Gwydion Stone and Audrey Saunders, then–

* heading out to drinks and dinner (through an unexpected, though very mighty thunderstorm) at Cafe Giovanni with the aforementioned group, along with Ryan Magarian and, coincidentially enough (considering I posted about his book less than 36 hours prior) Wayne Curtis — with whom I had a great conversation about rum, cocktails and writing — and while we ate, having Dale DeGroff, Tony Abou-Ganim and Paul Harrington stop by the table, then–

* having a nightcap — a fairly shabby one, unfortunately — at the Old Absinthe House, which (I’m told) recently reinstalled the bar — the actual, physical bar — that Patrick Gavin Duffy used to tend, way back in the day 70 years ago or so.

Because I am such a fucking geek.

4 Responses to Tales of the Cocktail, Day 1