This past week has been one long series of ibuprofin tabs and shots of Robitussin. But it’s Friday night, dammit, and Labor Day weekend to boot, so I’m shrugging off the damn virus for a few hours to start digging in the liquor cabinet.

This drink caught my attention the moment I read the recipe. Just before I went on vacation, the lovely and talented Lauren Clark of DrinkBoston had a wonderful profile run about her in the Boston Globe. In the photo caption — which doesn’t seem to be there any longer, unless I’m looking in the wrong place — there was a note that Lauren was sipping a drink called a Jaguar at Eastern Standard. Fortunately, I copied and pasted the text, since the caption included the recipe, which sounded really intriguing.

Now I’ve finally mixed one up, and intrigue? Hell, that ain’t the half of it. The whopping dose of green Chartreuse made me a bit uncertain at first, but it was a wise move to put myself in the hands of the drink’s creator, Tom Schlesinger-Guidelli. Matched with Amer Picon — I used some of the last of my Picon replica (created by Jamie Boudreau, recipe in July/August issue of Imbibe) — and a nice measure of silver tequila, the Chartreuse fell right into place. This cocktail is really imaginative, and the orangey notes of the amer, bitters and twist give the drink a bright citrusy character, while the tequila’s bite and chartreuse’s herbal mojo give it a lot of complexity.

Nice work, Tom, and a belated congrats to Lauren. The Jaguar is a keeper. 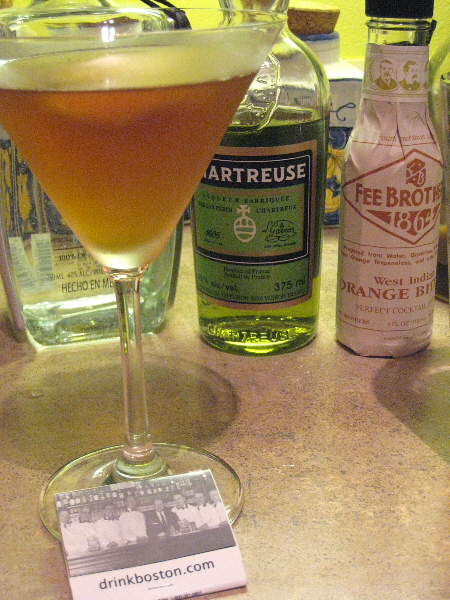 Stir with ice and strain into chilled cocktail glass; flame an orange twist over the drink.

9 Responses to The Jaguar