I’ve found myself falling into a cocktail rut lately — and it’s not just a defensive posture from drinking so much apricot brandy. Relatively minor, as these things go, but it’s been a bit more of a challenge to come up with an idea of what I’d like to have. So, in pursuit of recipes that I’m quite sure I’ve never tried, I turned to quite possibly my most beloved mixology-related book: Charles Baker’s The Gentleman’s Companion

Baker has no shortage of recipes that have never appeared elsewhere, sometimes with good reason: while the man spun a fine yarn about most anything poured into a glass, some of the mixes are slightly off, and others just downright weird. Here’s one of the latter, but for this one I don’t mean “weird” in an entirely disapproving light.

First, the setup: “Watch this one when out under the moon in a desert overnight camp, riding camels out across the vast dunes, or strolling in the moonlight around the Sphinx with some congenial young woman companion.”

The Sahara Glowing Heart Cocktail
from the Hands of one Abdullah an Arab Muslim Wizard back of Mahogany at the Mena House Bar, near the Pyramids of Ghizeh, which Are Just South of Cairo, Egypt

“Take of dry gin, 1 pony [1 ounce], absinthe, 1 pony, dry imported apricot brandy, 1 pony; donate 1/2 pony of bright rose coloured grenadine. Shake with lots and lots of ice and strain into a large saucer champagne glass, and pray Allah for forgiveness of all imminent and future sins of the flesh… 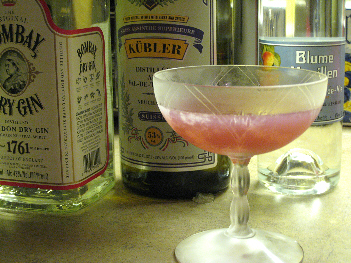 I’d be dishonest if I said Baker’s commentary wasn’t the primary driving force behind my effort at whipping up one of these, but I’m also trying assorted obscure absinthe cocktails (for reasons that will soon become evident), and this one seemed suitably obscure to include in the project.

Of the result, Baker writes: “To us this drink tastes a bit sweet [BINGO! –ed.]; also a bit dominated by absinthe or Pernod Veritas [ya think?!? –ed.]. So why not experiment to taste along these lines? … Ignore the grenadine, step up the gin to a jigger, whittle the absinthe to a dash or two inside the empty glass before pouring the chilled drink.”

Upon the first sip, I thought, “That’s one of the weirdest things I’ve ever had,” and to be honest, I’m still thinking that as I finish the drink. But, this ain’t bad — while sweet, as Baker says, there’s also a really engaging interplay between the apricot eau de vie and the absinthe. I’ll try Baker’s suggested variation at some point, but for now, I disagree on removing the grenadine entirely: the drink benefits from the additional fruitiness it brings to the table, but at 1/2 an ounce, it does make the cocktail startlingly sweet.

As Baker’s cocktails go, the Sahara Glowing Heart has the appropriate level of screwball distinctiveness to it, but it’s also not a bad basis from which to start playing with variations. Now if I can just arrange for some of that forgiveness…

← The Great Apricot Smackdown
Anybody waiting for Mixology Monday? →