No, I’m not referring to how long it’s been since my last post.

Instead, I’m talking about an ingredient that — more than a year after its impending appearance on U.S. shores was announced — finally made it to market. 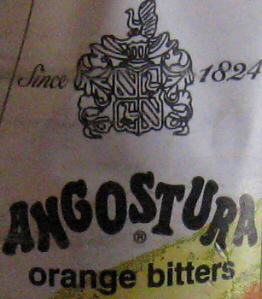 Initially introduced by KegWorks, and now apparently starting to show up in stores, Angostura Orange Bitters

took its own sweet time to hit American bars. Sure, there are all kinds of regulatory laws and import procedures that tend to bog down the process, but I’ve been checking store shelves for more than a year now, almost on a weekly basis, only to finally break down and order it online soon after it became available. I spent less time shopping for my house.

If you’re looking for a very delicate touch, like using orange bitters in a martini, the Angostura orange may be too assertive; for these, The Bitter Truth remain my orange bitters of choice. But when you need the bitters to step up and assert their undeniable citrus complexity, as in a Martinez (my favorite drink thus far in which I’ve used the Angostura), then these will fit the bill.

If I were to compare these to another orange bitters on the market, the closest in terms of complexity and assertiveness would be the Regan’s. But the flavors are still quite different, with the Regan’s having a crisper bitterness, while the Angostura puts the “orange” part of its character right up front. It’ll still take some experimentation to sort out the right cocktail for each bitters, but that’s the kind of work I like.

For everyone else who’s been working with these bitters — and those of you in the UK who’ve had them available for months and months and now yawn about this product can just keep that to yourselves for now — let’s hear how you like ’em. What drinks are you using to mix them in? Any tips or drawbacks you’ve found?

6 Responses to About Freakin’ Time, Part One