While I was working up my presentation for the “Cocktails With a Kick: Absinthe Returns to America” session at Tales of the Cocktail, I embarked on an extended search through old bar guides in search of attractive — and repulsive — cocktails of yore that featured the old savage green stuff. Starting sometime in the 1870s or thereabouts, absinthe started cropping up in a number of different cocktails, ranging from simple preparations such as the Absinthe Frappe or Absinthe Cocktail, to its use as a seasoning ingredient in innumerable drinks such as our old friend the Sazerac. 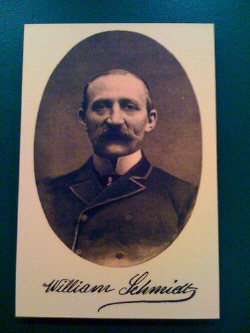 All was to be expected until I started digging deeper into the drinks of William Schmidt. (This photo-of-a-photo of Schmidt was taken at the Museum of the American Cocktail, and was kindly provided by Dinah Sanders.) A famed bartender close to Jerry Thomas’ era, “The Only William” penned a number of distinctive drink recipes that called for absinthe in The Flowing Bowl: When and What to Drink, first published in 1891 (you can purchase a 2007 reprint version here

). As I worked through the recipes, I noticed a pattern: many of the drinks followed a similar structure, pairing absinthe with “vino vermouth,” or Italian vermouth in assorted proportions, then completing the recipe with Ingredient X (with the occasional modifier of sugar or bitters added). This ingredient could be just about anything: Calisaya bitters, Fernet Branca, Old Tom gin, creme de roses, green Chartreuse, kummel — you name it, pretty much. Some versions, such as the kummel-laden Weeper’s Joy, are pretty damn tasty; others, such as The Mayor, which includes kummel, cream and a whole egg, seem much weirder.

Here’s one that works. For the last year or so, I’ve been a sucker for sherry in cocktails, and one of my favorite warm-weather drinks this summer has been the Sherry Cobbler (which I’ve somehow neglected to blog about, along with about 6,870 other things). The Anticipation matches sherry with vino vermouth, then incorporates absinthe in just a dash, with a little sugar to make it all appealing.

For my version, I used Carpano Antica Formula vermouth, which has a strong flavor particularly well-suited to cocktails that need a robust vermouthy zoom and a gentle bitterness. I also used Hidalgo Amontillado for the sherry, thinking that its dry, delicate richness would pair well with the vermouth; I’m willing to wager a nice Oloroso would also work wonderfully, whereas a Manzanilla or Fino could give the drink a nice crispness. Plenty of room to explore.

And explore I will: I really enjoyed the Anticipation; the nuttiness of the sherry nestled right into the sweet/bitter balance of the vermouth, and the absinthe served as seasoning: lending the aroma a gentle anise note, and functioning on the palate as a flavor enhancer without taking over the drink. Flavorful, aromatic and resolutely old school, the Anticipation also clocks in a bit lower on the alcohol scale — an oddity in the absinthe cocktail world, but a welcome diversion for times when you’re looking for a gentle nip, or for those late evenings when you’re not ready to leave the bar but don’t need another wallop of alcohol.

Stir well with ice and strain into a cocktail glass.