Within the last 24 hours I’ve learned of two active participants in the cocktail blogosphere who are now, um, on unscheduled sabbatical as a result of the global economic crap-tsunami (and that’s not counting the geniuses like me who thought it wise to quit a job just before the financial sector went into a tailspin). But hey, it’s Mixology Monday, and that’s always good for celebratin’, right? Unless the theme is Hard Drinks for Hard Times, as suggested by host Matthew Rowley, one of those who has EXTRA time on his hands nowadays — then, it’s one more reminder that it’s time to slowly freak out as you check your bank balance and your work calendar, both of which are looking pretty grim.

In times like these, there are all kinds of ideas on how to drink cheaper — I initially played with the idea of marking MxMo by making my own pruno, until I was stopped by a sudden attack of good sense. Elsewhere during this month’s MxMo — see, there are benefits to putting your post off until the last minute — there have been plenty of ideas on how to stretch the booze budget, whether it’s by purchasing cheaper brands, or putting the leftovers and free samples to good use, or by making your own hooch.Â  These are all good ideas, but for me, there seems to be one basic approach that’s not discussed very often, but which has been painstakingly described by one of the foremost writers on booze: the time-honored technique of stiffing your guests.* 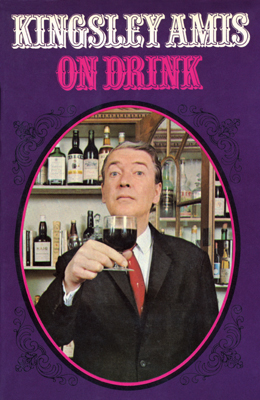 In his 1972 book On Drink (happily reprinted just last year as part of an expanded collection, Everyday Drinking

), Kingsley Amis dedicated an entire chapter to what he described as “The Mean Sod’s Guide”. At the beginning of the chapter, Amis makes his purpose clear:

The point here is not simply to stint your guests on quality and quantity — any fool can pre-pour Moroccan red into burgundy bottles, or behave as if all knowledge of the existence of drink has been suddently excised from his brain at 10pm — but to screw them while seeming, at any rate to their wives, to have done them rather well.

This is cheapskatery in its most creative form — transforming the host’s mission of generosity into an insolent penny-pinching endeavor in a way that makes it seem, at least to some of the assembled, that you’ve raided your liquor cabinet for nothing but the finest of spirits.

To accomplish this, Amis gives several suggestions, starting with the advance preparations:

Vital requirement: prepare pre- and post-dinner drinks in some undiscoverable pantry or broom-cupboard well away from the main scene. This will not only screen your niggardliness; it will also make the fetching of each successive round look like a slight burden, and will cast an unfavorable limelight on any individual determined to wrest additional drinks out of you. Sit in a specially deep easy-chair, and practise getting out of it with a mild effort and, later in the evening, a just-audible groan, though beware of overdoing this.

And, for the pre-dinner drink:

Procedures vary. The obvious one is to offer only one sort of drink, a ‘cup’ or ‘punch’ made of cheap red wine, soda water, a glass of cooking sherry if you can plunge that far, and a lot of fresh fruit to give an illusion of lavishness. Say you invented it, and add menacingly that it has more of a kick than might be expected. Serve in small glasses.

After dinner, more desperate measures may be called for:

[…] offer brandy, explaining a good deal less than half apologetically that you have no cognac, only a ‘rather exceptional’ armagnac. This, of course, produced with due slowness from your pantry, is a watered-down cooking brandy from remote parts of France or South Africa. […] Ask the ladies if they would care to try a glass of Strelsauvada, a ‘rather obscure’ Ruritanian liqueur made from rotten figs with almond-skin flavouring which admittedly can ‘play you up’ if you are not used to it. They will all say no and think highly of you for the offer.

Rather than drink a similar slop, keep something special for your own drinks:

These must obviously not be allowed to fall below any kind of accustomed level, however cruel the deprevations you force on your guests. You will naturally refresh yourself with periodic nips in your pantry, but going thither at all often may make undesirable shags think, even say, that you ought to be bringing thence a drink for them. So choose between a darkly tinted glass […] and a silver cup of some sort […] which you stick inseparably to and can undetectably fill with neat whisky…

Fine ideas, all — but this is about cocktails. Fortunately, the same approach can apply. To adapt the “drink cheaper” motif, here are a couple of cocktails that appear to be the same thing, yet have a substantial difference in price per drink. First, for you–

Combine ingredients in bar glass and fill with cracked ice. Stir with a silver barspoon wrapped in a $20 bill to keep your fingers from getting cold. Strain into chilled cocktail glass. Grand total: ~$4.70

And for your guests–

Combine ingredients in an empty beer can and fill with ice scraped from the sides of the freezer. Stir with a used fork and strain into a cocktail glass that looks something like yours so as to throw off any suspicion. Grand total: ~$1.76 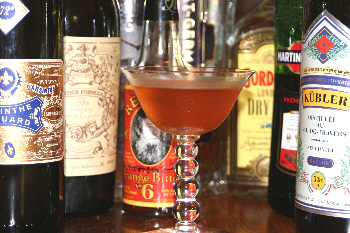 In both cases you have a similar combo;but while in the former you’re accenting the rich botanicals of the Blue Gin and Carpano Antica with the cascading vegetal flavors of a good absinthe and enlivening the mix with elderflower liqueur, in the latter you’re using that same liqueur, as well as a more flat anise note from the Kubler absinthe, to pull the flavors up from the not-quite-as-exciting mix of Gordon’s and mainstream vermouth. Less vavoom than the former, of course, but still, not bad.

Times are tough; sometimes a little pampering is required, and $4.69 for a decent homemade cocktail is a bargain compared to an afternoon at the spa or a weekend trip to Vegas.

* Oh, and the “stiff your guests” part? C’mon, just joshing — unless you’re one of the hostile commenters that’s followed me over from the “Proof” blog, hopefully you figured that out before ripping me a new one in the comments section. Though as Amis noted in his final instruction: “If you think that all or most of the above is mere satirical fantasy, you cannot have been around much yet.”

Now head on over to Rowley’s Whiskey Forge and see what the other miscreants have been up to this MxMo.

9 Responses to MxMo Hard Times: Drink Like a King(sley)