It’s been a while since my last post, regarding an absinthe event that Gwydion Stone and I put together for the Washington State Bartender’s Guild. But even though it’s been silent on my end, I’ve had a lot of activity coming into the site.

Part of this, my self-promotional side must point out, comes from the piece I wrote for the New York Times‘ Proof blog that ran last Friday; please read it if you have the chance. But my last post, regarding absinthe in America, has generated its own bit of traffic, and I thought some of it was worth mentioning.

I love absinthe. I know that some trend-watchers are now claiming it’s jumped the shark, but I could care less — I’m a big fan of that lively anise aroma and flavor, and the elegant herbaceousness of a well-made absinthe. But many people come to absinthe out of curiosity, given its history and now-defunct outlaw reputation. I totally understand that; it’s part of what first attracted me to the spirit, too, but ultimately image isn’t enough to keep a style of spirit alive; it has to have quality and flavor on its side to remain relevant with consumers.

This is something that has troubled me somewhat about absinthe. The initial brands on the market, Lucid and Kubler, are well-made absinthes that, while perhaps not to everyone’s liking, are still good representatives of the absinthe tradition. Over the past almost-two years, though, literally dozens of new absinthes have come onto the U.S. market; some, such as Marteau, are excellent; others, however, are execreble, and most fall somewhere in between. Unfortunately, many of the brands that appeared in 2008 have hovered near the bottom of the pack.

So I’m always on the lookout for a good, new absinthe, so I can boost it here and elsewhere, as well as enjoy it at home. And when I hear a lot about a product from readers who contact me online? Well, then I’d better investigate. 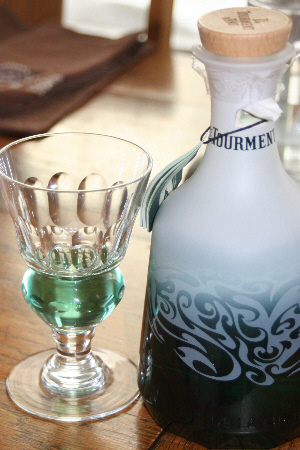 Here’s a relatively recent brand that I’ve received many comments about: Le Tourment Vert. Produced in France and bottled at 100 proof, LTV comes in a visually striking bottle, and can be spotted from across a crowded bar or liquor store — a plus in today’s market. But how does the product taste? Let’s see– (and in the interest of full disclosure, a sample of this product was provided by the product’s PR firm).

The spirit has a bright green color, dissimilar to that of typical verte absinthes; not surprising, considering that classic vertes receive their pale emerald hue from chlorophyll in flavoring and coloring herbs, whereas LTV notes on the label that it contains FD&C Blue and Yellow — a strike against, if you’re searching for an authentic absinthe (though “authentic” can be a squishy notion; back in the day, less-than-ethical producers put coloring agents in absinthe, some of them quite toxic, to make it much the same hue as LTV). 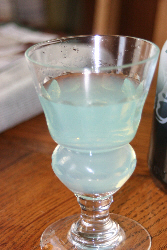 On the nose, LTV is thin and medicinal, with an artificial-mint type of aroma. With water added, the louche is … um … weak; I guess you could generously call it a louche, albeit a very thin and weak one, but it retains that artificial green element from the coloring. Finally, to taste — whereas a classic French verte is typified by an anise-forward aroma and flavor, with other herbs forming a broad vegetal character, the LTV is, as with the aroma, medicinal, with a mint component evocative of Listerine and an awkward chemical bitterness that is almost but not totally unlike that found in classic French absinthes.

I don’t enjoy writing about products I don’t enjoy, but sometimes it has to be done (and to be fair, I’ve also written about other absinthe brands that have failed to get me excited). This is one of those times: Le Tourment Vert isn’t the worst absinthe I’ve had, but it certainly makes the other brands at the bottom of the heap fight for that title. LTV hovers a scant shade above crappy and several points below tolerable; in short, it’s a lousy example of an absinthe, and you’ll typically learn this lesson for the steep price of $60 for a bottle.

So why then have I received so many supporting comments about the brand? Simply put, spam — or “sock puppetry“, or whatever you want to call it. In other words, someone — perhaps the PR firm, perhaps the brand, or perhaps an unknown third party; I really have no idea exactly who it is, nor do I really care — has been roaming the Internet, stuffing the comments areas of drink blogs with feedback along the lines of, and I quote: “LE TOURMENT VERT is absolutely the BEST absinthe I have EVER had. The Green Fairy is back in action!” or, for a recent absinthe-related post I wrote for Serious Eats, “Yeah, I’m not too big of a fan of black licorice, but the absinthe brand Le Tourment Vert that I tried was pretty good!” 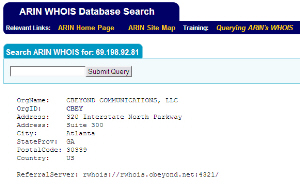 Am I just being paranoid? Could be, but fortunately the commenter/s to these posts, despite registering different gmail addresses, almost all used the same IP: 69.198.92.81 (though several comments, also from different e-mail addresses, came from 69.232.44.28; someone must have been working from home that day). Write it off to one overenthusiastic individual with way too much free time, or an aggressive online marketing campaign with little use for professional ethics, either way it stinks.

It may be marketing 101, but using deceptive tools is perhaps the best way to alienate not only bloggers but more mainstream media. It certainly worked in this case. (Though LTV’s miserable quality already sunk it in my book, so this is pretty much just a fresh load of manure on top of the pile. And while Le Tourment Vert’s spam campaign has given me every reason to be mean and spiteful, I’m not just dissing it because of that; this stuff is really bad. My kitchen smells like it now, after I dumped the glass in the sink, and I’ve gotta break out the Bon Ami to get that odor out of there.)

But on the flip side, here’s something that I do appreciate: in an e-mail I received today from a PR firm that represents several major brands, the rep wrote: “Iâ€™ve been following your blog for a few months and would love to know how (if at all) you prefer to be pitched by a spirit company.” Hey, imagine that — he asked how I’d like to be pitched, rather than coming on all sweaty and lecherous like ol’ grabby 69.198.92.81. Thanks for asking — here’s how we can work together…..

← Absinthe in America
MxMo Hard Times: Drink Like a King(sley) →