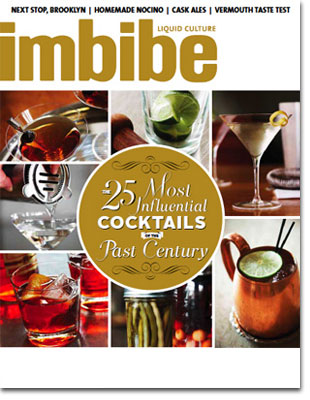 Drinks arenâ€™t something you should get too sentimental about. Tastes change, products come and go, and that bright-pink thing you couldnâ€™t get enough of last summer is now considered a punch line in every bar in town. Change happens, and over the past century change has happened in the drinks world more rapidly than ever. But as our cocktail books and iPhone apps have grown bloated with thousands of recipes, patterns have emerged, families have been formed, and itâ€™s become clear that on some level weâ€™re still drinking the same things as before.

I posted about this earlier this week over at Serious Eats, but to follow up here (since Iâ€™m rediscovering this blogging thing again): my cover story in the May/June issue of Imbibe is, â€œThe 25 Most Influential Cocktails of the Past Century,â€ covering drinks created (mostly) since 1910 that, in some way, have left a notable mark on the way we drink, whether thatâ€™s in the form of descendents and variations, or in the way bartenders and drinkers think about drink composition and ingredients, or in the lingering (or now defunct) trends a particular drink may have influenced. The list was initially chosen by myself, was vetted through the good folks at Imbibe to argue out the details, and was given further review by Greg Boehm, one of the most knowledgeable and history-oriented cocktail geeks on the planet.

The 100-year cutoff was admittedly arbitrary, but it posed its own set of challenges: by requiring the drinks on the list to have been created (or, in the many cases when itâ€™s nigh impossible to settle on a particular cocktailâ€™s date of genesis, to have entered broad circulation) after 1910, this eliminated some of the biggest and most obvious influences in the mixological canon: the Manhattan, the Daiquiri, the Martinez, the Old Fashioned and the Sazerac, and that whole world of punch. The Martini got a pass because it was still developing in the first decade of the 20th century and the mix of gin and dry vermouth didnâ€™t obtain the â€œMartiniâ€ sobriquet until sometime around that first decade, but also because the Martini evolved so significantly over the course of the century that the drink ordered by the Don Drapers of the 1960s was markedly different from the Hoffman House variations that were in early circulation. Likewise, who the hell knows when the first Cuba Libre or Caipirinha was mixed? Without a precise birthdate, I tried to track down some of the earliest mentions of such drinks to see when they started appearing in (primarily American and/or European) bars, and each of these fell after the 1910 mark; there may be further proof about the earlier origins of these drinks, but if itâ€™s out there, I didnâ€™t find it.

The folks over at Serious Eats have gone to town in commenting on this list, suggesting their own most influential drinks of the past century, with some straying widely from the mark (an 1860 Martini? I donâ€™t think so) and others making a good case for why one drink and not another should be on the list. Surprisingly, however, Iâ€™ve only received one e-mail regarding my selection of drinks, from which Iâ€™ll quote directly:

The 25 cocktails article is BAD, no worst than bad, it sucks and a kiss up to the small based fans of Paul Clarke (who ever the hell he is, another wanabee who has done nothing but have a lousy web site) How long has he been in this business? Has he heard of the Rusty Nail [â€¦] The Manhattan? Fuzzy Navel? and many more. Never heard of the Red Hook, Last Word or Saunders’ Gin-Gin Mule. I checked with other Bars and Bartenders who have been in the business for over 15 years, neither have they ! PLEASE I know everyone has his opinion. His sucks.

What do you think? (Really, even if you hated the story your comment can’t be more harsh than that, so don’t even try.) What drinks do you think deserve a place on this list, and which ones do you disagree with altogether? Thereâ€™s an argument for the inclusion of each drink on the list, which Iâ€™m happy to share if asked (nicely — seriously, Iâ€™m done with the ill behavior the Internet seems to invite, and if youâ€™re an asshole about something, your comment will be politely jettisoned and your existence on this earth denied).

And since the whole article isnâ€™t posted online, and linking back to the magazineâ€™s site earned me accusations of â€œwhoring the magazineâ€ over at Serious Eats, Iâ€™ll post the list here, arranged, as it is in the magazine, roughly by decade — but if you want a freebie on all the text and recipes, youâ€™re just gonna have to wait for the PDF, cheapskate.