In the early 1990s, when I was young and indestructible, on Thursday nights — and occasionally Wednesdays, and Tuesdays, sometimes on Fridays if we had a big enough group to take over the tables in the back but never, ever on Saturdays, when the weekend assholes were given rights to the place — it was my habit to visit, with a friend or ten, a bar called Milanoâ€™s, on East Houston Street in New York City.

I havenâ€™t set foot in the place since I moved to Seattle in 1998, but a quick Google informs me that Milanoâ€™s is still in existence, and a brief glimpse at Yelp turns up two recent reviews with the lines, â€œCheap Beer, Good Juke box, you don’t have to put the toilet seat down when you’re done,â€ and â€œI love seeing the old, old man in the corner getting his rocks glass refilled with Jack over and over in a period of 30 minutes, and still not stumbling out the door,â€ which in the absence of additional information makes me believe the place hasnâ€™t changed much since my last round at the narrow, then-smoky bar.

As Iâ€™ve written before, both here and over at the NY Timesâ€™ Proof blog, Milanoâ€™s played a major role in my formative drinking years. It was never the kind of place you wanted to start out the evening — unless you were willing to let that evening take a very weird turn — but I finished up countless nights there, many of them bleeding into morning, with the dim light coming up over the East River as we staggered out trailing cigarette smoke and beer fumes and cursing whoever first suggested hitting the bar on a weeknight.

It also wasnâ€™t (and presumably still isnâ€™t) a place where you ordered a cocktail — at least, nothing more ambitious than a Jack and Coke. This was fine by me at the time — aside from the occasional glass of bourbon or scotch, I was primarily a beer drinker back then, and when ordering my first pint at the bar I basically had two choices for where to take the evening: Bass or Guinness. Usually, Bass won out, if for no other reason than that itâ€™s possible to drink a lot it without feeling like you just swallowed an iron stove, but on some nights only the bracing rigor of stout would do, sometimes — but not often — with a backup of Jim Beam in case it was someoneâ€™s birthday or theyâ€™d just quit their job (whether voluntarily or not) or there was some other reason for celebration and/or just extra drinking. It wasnâ€™t fancy, but it was beer and whiskey; throw in the Holy Ghost and youâ€™ve got yourself a trinity, and a full-blown religion canâ€™t be far behind.

Today isnâ€™t my birthday, and itâ€™s been more than two years since I quit my job, but we do have something to celebrate, kind of: itâ€™s Mixology Monday, this time hosted by Andrew Bohrer over at Caskstrength. Andrew came up with possibly the most challenging MxMo theme weâ€™ve had in the four years of running the event: instead of picking a type of spirit, or a particular flavor, or some kind of conceptual edge for the event, Andrew picked a person â€“ and not just any person; no, Andrew is basing this monthâ€™s event on the patron bard of booze and smokes (who, ironically or actually not so much when you really think about it, swore off the stuff almost 20 years ago): Tom Waits.

You can read Andrewâ€™s reasoning behind the concept over at his site, but I was first turned onto Tom Waitsâ€™ music about a month after my 21st birthday, so Iâ€™ve been an ardent fan of his raspy weirdness for pretty much all of my legal drinking life. As far as I can recall from my time there in the â€˜90s, Milanoâ€™s never had any of Waitsâ€™ music on the jukebox — it was much more a Sinatra and Pogues kind of place, and given the fly-in-amber quality of the best dive bars, those same songs are presumably blasting over the barâ€™s speakers right now. But at the bar, while sitting next to the 70-year-old guy who was there every fucking night from 5pm until the 4am close, grinning at every pretty woman who walked by and occasionally knocking over his barstool while getting into a shuffling pretense of a fistfight with the 80-year-old guy sitting on the other side of him, you were pretty much sitting inside a Waits song from his boozy era in the â€˜70s. 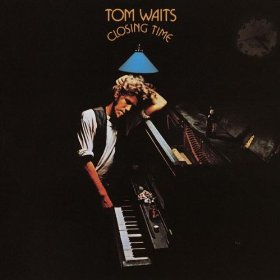 Tom Waits doesnâ€™t drink anymore, and Iâ€™m not sure how heâ€™d feel about this little online cocktail event thatâ€™s taking place in his honor, but part of the event is to come up with a drink suitable for the theme, so hereâ€™s mine: Grapefruit Moon. Named for a maudlin bawler on Waitsâ€™ first album (titled, appropriately, Closing Time

), the drink was kind of a bitch to come up with, and hereâ€™s why: the concept of anything as fussy as a cocktail seems grossly out of place with so much of the sentiment found in Waitsâ€™ music, especially the early, boozy stuff. But, this is the gig, so I set a few ground rules for myself: first, my drink had to have some bearing on my own dive-bar experiences as noted above, for it to have some personal connection; and second, the drink canâ€™t be too complex or have anything you wouldnâ€™t reasonably find in a basic bar (or, as backup, something youâ€™d be able to buy in a neighboring 24-hour deli).

I started off working with the two basic things I drank way back then: beer and bourbon. Bass was tempting, but ultimately stout won out as an accompaniment to the whiskey. Then there was the name: Grapefruit Moon has been a regular on my CD player and iPod for around 15 years; add to that its sense of barroom presence, plus it has a fucking drink ingredient in the name, and I needed no further rationale to justify grabbing that as a name, provided I could factor grapefruit into the combination somehow (and any bar that can put together a Salty Dog is gonna have a can of grapefruit juice around somewhere). 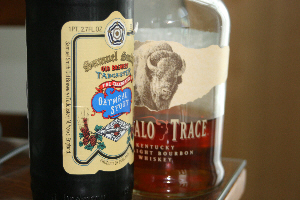 Interestingly (to me, at least), coming up with the final recipe was easier than I thought: bourbon and stout are natural friends, and grapefruit matches with bourbon in the Brown Derby (named after the former bar and restaurant in L.A., which also kind of makes sense for this whole Tom Waits theme, kind of). Sticking closely to the â€œingredients youâ€™d find in a basic barâ€ idea, I initially just dribbled in a little sugar to sweeten the mix; stepping away from that concept just a tiny bit, I found the drink works somewhat better if you use a barspoon or so of maple syrup — not a common ingredient, I grant you, but it gives the drink that Nighthawks at the Diner

eggs-and-bacon connection that Iâ€™m going to stick with for now (plus, to hark back to my old Milanoâ€™s reference, thereâ€™s a 24-hour deli on the corner; if it comes down to it, just grab a bottle of Log Cabin off the shelf the next time you step out for a smoke and bring it back with you). Toss everything on top of some crushed ice (or, realistically, that mushy bar ice) in a beer glass and youâ€™re golden.

Mix bourbon, grapefruit and sweetener in a shaker. Shake well with ice and strain into a pilsner glass or tall beer glass filled with crushed ice. Top with chilled stout.

Surprisingly, this is a pretty damn good drink â€“ Iâ€™ll even mix this after MxMo is over. Now head on over to Andrewâ€™s site and see what other drinks and stories people came up with for this round of Mixology Monday.