I’ve been sitting on this recipe for a while.

This drink initially caught my attention last winter, while working on the (aborted) 60/30 thingy in which I tried to revive my own interest in this blog by writing about a whole hell of a lot of stuff. Writing about 60 drinks in 30 days over the busy holiday season proved to be, well, a stupid idea — but this drink, that I was holding in reserve but never got around to posting? Pretty much the opposite of a stupid idea.

The Weissen Sour comes from Kevin Diedrich, late of the Burritt Room in San Francisco; the drink appeared on an early menu for the bar, and during the course of talking to Kevin about other stuff I was writing last fall, I asked if it’d be okay to run the recipe for this drink. Kevin’s moved on from Burritt Room now (heading to Jasper’s Corner Tap & Kitchen, according to Paolo Lucchesi), and considering the beer-forward nature of the new place, this drink that combines bourbon with brew seems particularly fitting.

(Fitting for what? Well, today is Mixology Monday, an online cocktail thingy that’s been going on for more than five years now — anyway, this month’s event is hosted by Fred at Cocktail Slut, and for July’s theme, Fred chose Beer Cocktails — so, now the whole thing hopefully makes sense.)

When you come right down to it, the Weissen Sour is an amazingly simple drink: just a basic whiskey sour with the tweak of adding orange marmalade (if you’re playing along with the name game, I suppose that’s a tour through the Omar Bradley with a tip of the hat to the Marmalade Cocktail, though now it’s getting complicated) and orange bitters, then tossing the thing in a highball glass (with ice? I neglected to ask Kevin, so I went for it, though in hindsight it might have worked better with crushed ice rather than big cubes), and finishing it with a punch of chilled weisse beer. 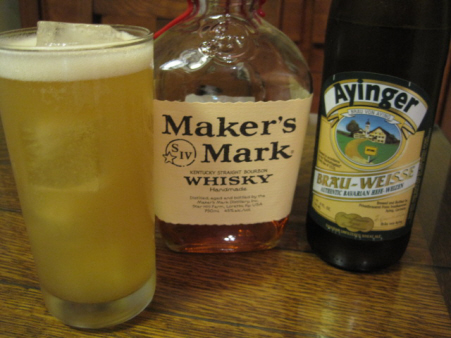 As anyone with an occasional (or frequent) boilermaker habit can tell you, bourbon loves the hell out of a cold, crisp beer, and as we head into mid-July, few beers are crisper or more appealing than a decent weisse. For this drink, I used Maker’s Mark (wheated bourbon, wheat beer…) and Ayinger Brau-Weisse for the beer. I’m not sure if I wound up trampling all over Kevin’s original recipe for the drink, but I’m pretty pleased with the result: the gently sweet fruitiness of the marmalade is a great bridge between the richness of the bourbon and the flowery aromatics of the beer, and the mixture is simple enough that you don’t feel anything is going over the top.

Combine everything except beer and garnish in a cocktail shaker; smush the marmalade around to help it dissolve in the liquid, then fill shaker with ice and do what comes natural. Strain into highball glass (I filled mine with ice, but give it a try without if the idea of pouring beer over ice skeeves you out), and top with chilled beer.

And that’ll get you through a warm July evening.

That’s what I’ve got for this round of Mixology Monday. Be sure to head over to Fred’s place and see what other drinks folks have come up with this month.

← The summer of pisco? Let’s start with the Bell-Ringer….
MxMo Come to your senses: do you smell something in here? →

4 Responses to Beer? Bourbon? Oh, hell–make it both