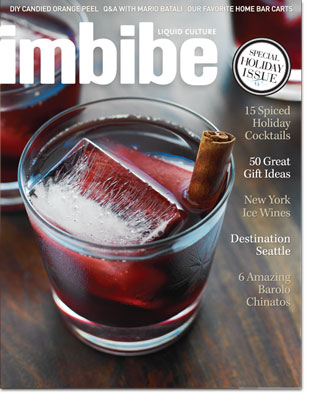 Over the past few years at Imbibe, Iâ€™ve had the chance to write about the cocktail situation in Las Vegas and San Francisco, Los Angeles and Vancouver. But it wasnâ€™t until the current issue (which appeared in mailboxes last month — hey, I’ve been busy) that I finally had the opportunity, or the excuse, to officially roll through many of the craft-cocktail bars in my own hometown of Seattle. (The November/December issue is still available on the shelf, or if you need to read the Seattle piece RIGHT NOW, hereâ€™s a link to a PDF copyÂ — but really, get the magazine).

One of the drawbacks of these kinds of stories is that I never have enough space to fully recognize some of the more noteworthy bars and the talented bartenders that I come across. In the print version of the story, I included recipes from Erik Hakkinen at Zig Zag CafÃ©, Eric Carlson at Moshi Moshi, and Jay Kuehner at Sambar, but these are only a few of the bartenders who have made Seattle into the city it is today: a soggy, Ramazzotti-soaked destination for the cocktail enthusiast and/or the discerning inebriate.

But whaddaya know — I have a blog, a little rusty from recent disuse but as far as I can tell, still functional (knock wood). So over the next week or so — emphasis on the â€œor soâ€ — Iâ€™m going to run a few notes and recipes from bars and bartenders I may have mentioned in the article, but didnâ€™t have a chance to fully recognize. 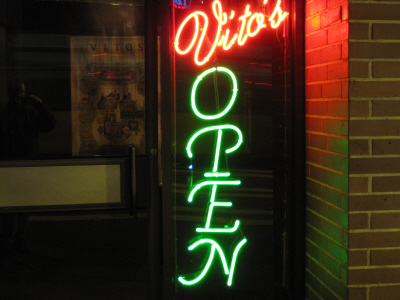 First on this mini-tour of Seattle bars is a place that I first visited not long after I moved to Seattle in 1998: Vitoâ€™s, on First Hill. Vitoâ€™s has been around since the 1950s, and the dÃ©cor seems to hardly have changed since its debut (donâ€™t believe me? Check out the Cougar Room in the back). In the late â€˜90s, Vitoâ€™s was a fun if slightly down-at-heel kind of place to spend a Saturday night; more recently, the bar had a run of bad luck, and the memories it inspired started trending to the â€œI almost got shot thereâ€ variety.

But last year, new owners started cleaning the place up, keeping the non-ironic retro furniture and the edge-of-downtown aura to the place, but spiffing up the menu and the music and just generally getting Vitoâ€™s vibe and clientele back into more-or-less respectable territory. Even better — at least from a cocktail-geekâ€™s perspective — the barâ€™s booze selection was seriously rethought. Sure, you can still get a can of Oly and a shot of well whiskey at the bar, but Vitoâ€™s is reflecting its Italian influence with more than just the eggplant parm; bottles of Italian aperitifs, spirits and liqueurs such as Zucca Rubarbaro, Strega and Barolo Chinato now populate the back bar, and the bar menu has a serious drink-geekâ€™s touch, with cocktails such as the Waldorf & Statler, made with gin, falernum and Fernet Branca; the Akimbo, a rye, Campari and Barolo Chinato drink not on the current menu but worthy of a return engagement; and the Tom Handy, a Sazerac interpretation made with Rittenhouse rye and Remy VSOP, spiced with The Bitter Truth Creole Bitters. The drinks take an East Coast, spirit-forward approach, and this winter Vitoâ€™s is even serving Smith & Cross-fuelled Tom & Jerrys, the first regular appearance of these Iâ€™ve seen in a Seattle bar.

Still, Vitoâ€™s is not immune from misfortune, as is demonstrated by my Imbibe story: Â while I recognized bartenders Jared Scarr and Nabil Sherief for their work behind the bar, somewhere in my fuzzy joy at finding that Vitoâ€™s had cleaned up and had taken the craft-cocktail pledge, I accidentally gave Jared a promotion to bar manager, overlooking the man whoâ€™s done the most to turn Vitoâ€™s beverage program around: Justin Gerardy.Â­Â­ So here, in front of the Internet and everybody, I offer my apologies to Justin, and as testament to the skill of Vito’s bar staff, I offer you one of the establishment’s original drinks (developed by barman Connor O’Brien and named by Gerardy), To Hell With Spain.

To Hell With Spain

Combine ingredients in a mixing glass and fill with ice. Stir well until chilled, about 30 seconds. Strain into chilled cocktail glass; garnish with a cherry. 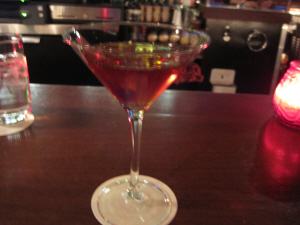 â€œRemember the Maine, To Hell with Spainâ€ — get the connection? This is the Remember the Maineâ€™s smoky Scottish cousin, with the peaty complexity supplied both by the new-ish Johnny Walker Double Black, which carries an extra payload of Islay malt in its blend; and by a touch of Laphroaig, just to keep the fire burning. Cherry Heering, Carpano and absinthe are burly enough characters to take a little smoke in stride, and the result is a powerfully flavored, richly alluring cocktail.

As Gerardy says, â€œI tend to be most interested in a drink that references its ingredients, rather than tries to redefine those flavors. When you do that, some of the reverence for that is lost.â€ No worries of anything getting lost in this mix â€“ itâ€™s one Iâ€™ll come back to, especially as the season gets darker and colder.

3 Responses to A drink at Vito’s in Seattle, and a correction–