Iâ€™ve gotten lazy. Not just with this blog–I mean, look at how long itâ€™s been since the last post–and not just with documenting whatever drinks-related writing and cocktail-related things Iâ€™m working on at any point in time. No, Iâ€™ve gotten lazy, in general, with drinks–which explains why, on this Mixology Monday, when the theme is tiki, Iâ€™m mixing something that goes into a damn cocktail glass. 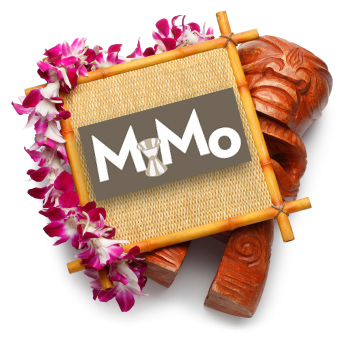 There was a time when a call-to-tiki-arms would have had me making batches of syrups and shopping for passionfruit puree or essence of guava or some other exotic ephemera, and at times I still summon that kind of energy. But nowadays, my mixological habits tend to follow the path of least resistance; unless I have a particular hankering for something, preparing for a group event or tinkering with a work-related project, most likely Iâ€™m mixing something no more ambitious than an Old Fashioned or a Martini, or punting into even easier territory by skipping straight to whiskey-rocks or simply popping open a beer. And thereâ€™s not a damn thing wrong with that.

But as I said, itâ€™s Mixology Monday, the somewhat-monthly event that pokes me into action, prompted in large part by the guilt Iâ€™d feel at shirking an event that I originally introduced in 2006–oh, the innocence of those bygone days!–and have moderated for almost six years. This monthâ€™s host, Doug Winship, selected tiki as his theme, no doubt envisioning a minor horde of home mixologists breaking out their blenders and their tiki mugs for some mid-winter escapist tippling.

But the guilt! Plus, Iâ€™m thirsty! So, hereâ€™s something fairly easy, but that still fits in with the general theme: the Trade Wind Cocktail.

As with almost anything else faux-tropical related, Iâ€™m nabbing this recipe from the valuable work done by Beachbum Berry. In his Beachbum Berry Remixed

, Jeff notes that this drink is from the Trade Winds Restaurant on Long Island, and dates it to 1959. Unlike the flood of other drinks that came from the mid-century Polynesian-style era, the Trade Wind is based on gin, not rum, and really, the only touch of the Caribbean or any warm-weather locale is the three-quarters of an ounce of curacao that sweetens this otherwise simple twist on the gin sour. 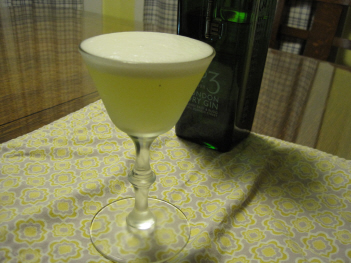 And as I said earlier regarding a beer or a whiskey-rocks: thereâ€™s not a damn thing wrong with that. Not all drinks that fit under the tiki umbrella are fabulous 12-ingredient formulations; thereâ€™s a need in the exotica pantheon for drinks that are smaller, drier and brighter than the syrup-laden punches that fill massive ceramic mugs. Most traditional bars, even today, have little room for tiki and its ilk (for good reason, in many cases); tiki bars, however, are more forgiving, and a basic gin-based drink tagged with a tropical moniker can still evoke ideas of a lazy day in the islands, even if the most exotic place on this particular island is within walking distance of the LIRR.

Combine in shaker; dry shake until foamy, about 10 seconds, then add ice and shake again another 10 or thereabouts. Strain into chilled cocktail glass.

← A drink at Vito’s in Seattle, and a correction–
Disappearing Act →