There are still a few people floating around who haven’t heard of Fritz Maytag and the wonderful things he’s done with all manner of alcoholic beverages for more than 40 years. For a full rundown, I encourage you to Google “Fritz Maytag” and “craft brewing,” to get a small idea of how Maytag helped save American beer from itself, and added fuel to the smouldering craft beer movement.

In the early 1990s, Maytag turned his imagination to spirits, and the first challenge to present itself was rye whiskey. At the time, there was precious little rye on the market, and Maytag saw a niche for a high-end, craft-produced rye. An interest in history also led him in a direction that was contrary to prevailing whiskey wisdom: that is, the longer the whiskey has aged in charred oak casks, the higher the quality of the finished product. After determining that early American whiskies — in other words, early rye — was often minimally aged, and frequently had mashbills composed purely of rye, Maytag set out to create premium versions of the highly charged rotgut that flooded Eastern markets 200 years ago.

Named for the San Francisco hill where the distillery is located, Old Potrero debuted in 1996. The whiskey is a pure-rye single malt, and is crafted in two versions: an 18th-century style whiskey, aged less than two years in lightly toasted — not charred — oak barrels and bottled at cask strength, around 125 proof; and a 19th-century style whiskey, aged slightly longer in charred barrels, and bottled at a more modest 90 proof.

Comparing single malts such as Old Potrero with more typical straight ryes such as Wild Turkey and Rittenhouse required a bit of a balancing act; indeed, even when hidden among an array of more than a dozen other whiskies, the two versions of Old Potrero were so distinctive that it became immediately apparent something unusual was being sampled. 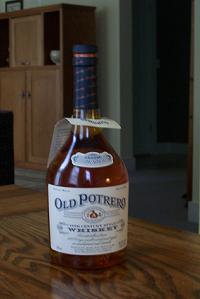 As this style of the Old Potrero is not aged in charred oak barrels, it can’t under U.S. law be labeled a “rye.” With its minimal aging and barrel-proof bottling, the 18th-century style is a bit of a rough character, and has earned both accolades and brickbats from spirits fiends over the past decade.

The whiskey comes up very pungent in the glass, with a dry, sweet herbaceousness tinged with heather and grass. Its alcohol heat is readily apparent, bringing waves of an aroma that reminded some panelists of grappa, and others of kerosene.

The heat and herbaceousness continue in the flavor. Once tasted, there’s no denying this is a single malt, with rye’s distinctive musty, dry character washing over the palate in aggressive waves.

While the whiskey came across as intriguing, it was a bit too hot and fierce to garner much enthusiasm among the panelists. Two tasters appreciated the whiskey’s unique character, while others found it “offputting” and unmanageable.

At a lower proof and somewhat more tempered by the wood, the 19th-style Old Potrero earned more praise from panelists. As with the 18th century style, this whiskey immediately distinguished itself from the other ryes in the tasting, reminding panelists more of single-malt Scotch or grappa than of American whiskies.

The aroma was dry, almost dusty, with sour, peaty notes and a complex menthol and turpentine character. When tasted, the whiskey had a mild honeyed sweetness, with a long, peppery finish and a lingering herbaceousness. Panelists described the whiskey as “earthy,” and drew comparisons to mushrooms, pomace and cherry pits.

While the 18th century style Old Potrero was a difficult whiskey to love, the 19th century style was much more agreeable. It was the top pick in the first round by two of the panelists (without the Buffalo Trace and Black Maple Hill whiskies taken into account), and placed second on another panelist’s first-round list.

But while the Old Potrero placed so well, it also sparked a debate on what is a rye? As a single malt, and minimally aged at that, the whiskey was very different from every other straight rye we encountered, differing from whiskies such as the Van Winkle or the Rittenhouse similar to the way that a rhum agricole differs from a rum from Jamaica or Puerto Rico. In a totally blind tasting, without the benefit of even knowing what type of spirit is being tried, its quite possible the Old Potrero would be placed in a Scotch or Irish whiskey category, rather than that of an American straight rye.

With its unique character, the Old Potrero is most suited to be enjoyed with nothing more than an ice cube or a few drops of water; mixing it in a Manhattan or another rye cocktail will likely result in a surprising and not-entirely pleasant result.