In the spring of 2006, a time when you could fit every cocktail blogger in the world at the same dining room table (and still have a spot open for Elijah), I thought it might put some sociability into social media if we could pull off the closest thing we could manage to a cocktail party, considering that we were arrayed around much of the globe. Always a fan of the power of alliteration, I dubbed the thingy â€œMixology Mondayâ€ and sent out the invitations. A respectable half-dozen or so responded to MxMo Iâ€”including bloggers like Darcy Oâ€™Neil, who still hangs around the booze world in various capacities, and Rick Stutz from Kaiser Penguin, who doesnâ€™t really anymore (though as I learned during a surprise encounter with the Kaiser recently at Death & Co., heâ€™s lost none of his enthusiasm for funky rum)â€”and since nobody shattered the stemware or pocketed the silver at that first party, a changing crowd of bloggers (I passed the hosting and moderating reins to Fred Yarm at Cocktail Slut a few years ago) has kept the thing rolling on and on as the roman numerals piled up.

When I talked to Fred in New Orleans last month, he reminded me that the 100th round of this online cocktail party was coming up fast, and needled me to participate. And when he went on to theme this milestone MxMo C after my bookâ€”well, what else is there to do but raid the liquor cabinet once more for old timeâ€™s sake?

Fredâ€™s aiming at simplicity for this MxMo, and thatâ€™s a theme central to the recipes in â€œThe Cocktail Chronicles

.â€ For as the cocktail renaissance has roared, the bar world has become increasingly complex. In many ways, thatâ€™s fantasticâ€”options are wonderful things to have, and parameters often benefit from a little pushing. But complexity can also be overwhelming and intimidating, and can distract from the pure satisfaction that can be found in enjoying a decent drink. Simplicity also makes an individual drink more approachable, both by preparer and consumer, and this approachability can lengthen a particular recipeâ€™s life span.

So how does a contemporary drink both tap into the wonders that have come out of the recent cocktail renaissance, while hewing close to the code of simplicity? Hereâ€™s one recommendation: the GT Swizzle. 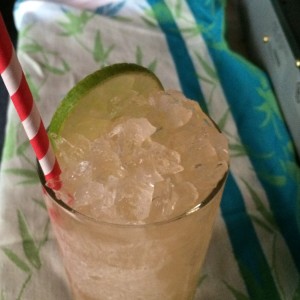 On the one hand, the GT Swizzle is nothing more than a Gin & Tonic (an unfizzy one at that), one of the most simple drinks in cocktaildom and one thatâ€™s lost none of its power of refreshment (especially during a summer thatâ€™s seen the hottest July on record). But while the average G&T can be an ignoble thingâ€”slopped together in a glass or plastic cup with a glug of well gin and a sploosh of tonic from a soda gun or a plastic liter bottleâ€”an advanced G&T can be a cornerstone of civilization.

While meditating on the G&T one night, I wondered how it might be possible to make a drink that provides such bounteous refreshmentâ€”well, even more refreshing. To that end, I tapped another forceful heat-busting style of drink, the swizzle, composed of a few basic ingredients and (importantly) a flurry of crushed ice, which is then whirred together in such a way as to supercool the drink and, by extension, the drinker.

Most traditional swizzles are based on rumâ€”and, it should be noted, a higher-proof rum, which is tempered by the dilution provided by the ice, but which also brings enough robustness of aroma and flavor to withstand such dilution. Following this theme, I reached for a Navy-strength ginâ€”a potent expression of the spirit that was pretty much absent from the bar a decade ago, but is now well-represented on the shelf, with bottlings such as Plymouth Navy Strength, Haymanâ€™s Royal Dock (which I used in this drink) and Perryâ€™s Tot, along with the wonderfully expressive Sipsmith VJOP (very juniper, over-proof), which I imagine would make a slam-dunk GT Swizzle.

Swizzles also often include another potent-flavored modifier, such as mint. For the GT Swizzle, I swapped the G&Tâ€™s usual tonic water for tonic syrup (in this case, Yeomanâ€™s Tonic Syrup from Jennifer Colliauâ€™s Small Hand Foods), as it provides the amplified tonic flavor Iâ€™m looking for, without the added dilution from the soda water (since ice-melt from the swizzle has got that base coveredâ€”though you could instead use your favorite tonic water, just be moderate with the dosage or else youâ€™ll swamp the ice-rich power of the swizzle). And as the final accent to the drink, I added a couple of dashes of The Bitter Truthâ€™s Tonic Bitters, a bang-up recent addition to the bitters shelf from one of the masters of the bitters craft.

100 rounds of Mixology Mondayâ€”wow, yâ€™all, thatâ€™s fantastic. Thanks so much to Fred for keeping this thing alive for so long â€“ and head on over to his site for a roundup of this milestone event.

Yesterday, I launched into a wandering and long-overdue meditation on the whiskies that, for me, made the long, grisly winter of ’12-’13 endurable. Yesterday’s post covered bourbon; today, it’s all about the Scots and the Irish. When looking back on brown-booze season, it wasn’t all a bourbony blur around here. These are a few approachable,… END_OF_DOCUMENT_TOKEN_TO_BE_REPLACED

Some people — okay, me — are of the mindset that brown booze is a year-round sort of thing, the kind of drink you keep in your glass on winterâ€™s darkest evenings as well as summerâ€™s brightest afternoons. But there are also people — okay, me again — who think that whiskey and other aged… END_OF_DOCUMENT_TOKEN_TO_BE_REPLACED

Some cocktails are like caresses — smooth and soothing, with delicate touches that deftly flick away all the assorted troubles of the day. But sometimes, tenderness isnâ€™t whatâ€™s needed. Sometimes, a little savagery is entirely appropriate. Dark, bitter drinks have become almost a clichÃ© in todayâ€™s cocktail world â€“ and I say â€œalmost,â€ because no… END_OF_DOCUMENT_TOKEN_TO_BE_REPLACED

Oh, so that’s where WordPress hid the “Publish” icon! It’s been a long drought around here, for all the usual reasons — laziness, busy-ness, and some lingering technical snafus that took much longer than I’d hoped to be resolved — but I’ve been meaning to dust off the blog for a bit, and today seemed… END_OF_DOCUMENT_TOKEN_TO_BE_REPLACED