Some people — okay, me — are of the mindset that brown booze is a year-round sort of thing, the kind of drink you keep in your glass on winterâ€™s darkest evenings as well as summerâ€™s brightest afternoons. But there are also people — okay, me again — who think that whiskey and other aged spirits are particularly well-suited for the cooler months, and make these spirits a staple of their October-through-April sipping, if for no other reason than to leave a few months open so all those gins, light rums and blanco tequilas in the liquor cabinet donâ€™t start feeling neglected.

Itâ€™s been sunny and in the 60’s in Seattle, and this past winter was quite gentle in these parts, though snow and ice and traffic-snarling storms seem to have continued right up to Easter in other parts of the country. But with the season finally starting to shift, I thought Iâ€™d perform my semi-annual dusting off of the blog in order to tip my proverbial hat to some of my most reliable whiskies from this past season.

Note I didnâ€™t write â€œessential whiskiesâ€ or â€œbest whiskiesâ€ or â€œgreatest whiskies youâ€™ll never be able to tasteâ€ or any of such tripe (those ideas I save for my paid work–Â KIDDING! But not reallyâ€¦) — Â but rather, these are whiskies that, over the past six months or so (with several making repeat appearances from winters past), have made it into my glass with such frequency that they deserve a generous pour of credit for keeping me from absolutely losing it during another gray, damp, moss-gathering Seattle winter.

Iâ€™m not listing anything exceptionally rare or expensive here — hell, some of these may come across as downright pedestrian — but especially during the winter grey, whiskey hour is regularly observed in my house, and if it was all Pappy 20 and Gordon & MacPhail selections around here, Iâ€™d be even more financially destitute than my questionable career as a booze writer already leaves me.

Anyway, hereâ€™s what kept me kicking during the bitter badness of the winter of â€™12 – â€™13; for the sake of readability and something resembling organization, Iâ€™m splitting this post in two, with the first covering American whiskies and the second, whiskies from Scotland and Ireland: 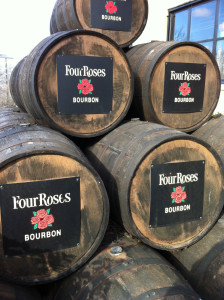 * Pretty much anything from Four RosesÂ — You couldnâ€™t buy Four Roses straight bourbon 10 years ago — not in this country, anyway. But one of the best things to happen to bourbon drinkers in the century thus far is the grand American homecoming of Four Roses. 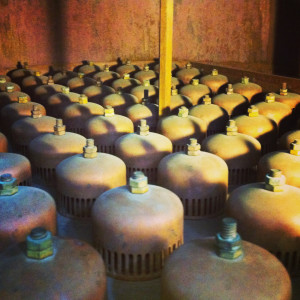 Again, how the hell should I know how they manage to pull flavor magic out of a pile of corn and rye — but whatever theyâ€™re doing, it works across their product spectrum, and the Four Roses Yellow Label is one of the few basic, entry-level (read: around $20 or less) bourbons Iâ€™ll drink all on its lonesome, though it does make a very comforting Old Fashioned. As far as the more premium bottlings — well, theyâ€™re just perfectly balanced, a nice mix of rye spice and corn sweetness with enough barrel influence to make it sugary and seductive without going over the hill into oaky astringency.

* Pretty much anything from Heaven HillÂ — Pretty much, that is; ignore the novelty items and the assorted vodkas, liqueurs and other spirits that help them pay the bills, and focus on the exceptional (and extensive) range of bourbons, rye whiskies and others (Mellow Corn! Bernheim Wheat Whiskey!) that Heaven Hill produces. 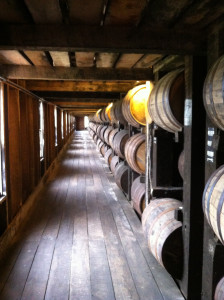 Iâ€™ll admit to sentimentality about Heaven Hillâ€™s whiskies: the basic Evan Williams black label was the first straight bourbon I ever purchased way back when I was … well, let’s not get into that; Elijah Craig has been my workhorse bourbon in god knows how many Old Fashioneds in recent years; and Rittenhouse Bonded Rye Whiskey is goddamn Rittenhouse Rye, world without end amen — but my fondness for their whiskies extends beyond mere sentiment.

Old Fitzgerald Bottled-in-Bond has been dueling it out with Four Roses Yellow Label for ownership of my â€œeveryday bourbonâ€ shelf for the past few years. Wheated bourbon is one of my many weaknesses, and Old Fitzgerald has that wheated softness that I find so sultry, with a little fillip of sourdough tang to keep the whiskey from lapsing into somnolence. Last year Heaven Hill introduced Larceny Straight Bourbon — exactly the same stuff as Old Fitz, but bottled at a different age and a different proof, which gives the old whiskey a fresh appeal — and Iâ€™ve been known to nip into that these past few months for the occasional Old Fashioned or Revolver Cocktail. The only problem with the arrival of Larceny is now I have to keep an additional bourbon stocked in my house at all times. 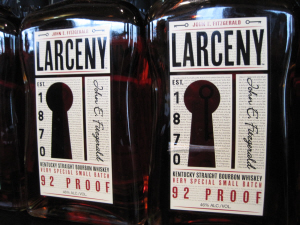 While both of these whiskies are still in the very modest $20-ish range, depending on where you live, Heaven Hill also delivers very well at the higher echelons of bourbon: Evan Williams Single Barrel is one of the best bargains on the bourbon shelf, a lovely sipping bourbon that flirts around the $30 mark; and to show how much they care (and what they can do), Heaven Hill has been annually releasing blockbusters under the Parkerâ€™s Heritage CollectionÂ label. Last yearâ€™s release, the â€œBlend of Mashbills,â€ spotlighted the diverse skills of Parker and Craig Beam, but my favorite so far has been the cognac-finished bourbon from a couple of years ago. Exceptional aged bourbon with the fruity kiss of cognac? That pretty much eliminates the need for me to ever make the choice again.

* Eagle Rare Single Barrel BourbonÂ — Yes, Buffalo Trace makes a hell of a lot of good whiskey, and everything from the distilleryâ€™s eponymous bourbon to Handy and W.L. Weller makes it into my glass every winter, but Eagle Rare is the one I start to sweat about when the supply is running low.

This is such a gorgeous, balanced whiskey at a cheapskate-friendly price, which is what Iâ€™m usually looking for when Iâ€™m about to make a liquor run and Iâ€™m going through my pockets looking for misplaced $20 bills. Chuck Cowdery recently pointed out that Sazerac has shifted Eagle Rareâ€™s bottle proof in recent years; this may have happened before I started keeping it on hand (or maybe I just wasnâ€™t paying close enough attention), but Eagle Rare still delivers a much more complex flavor and rounded character than youâ€™re likely to find in any other bourbon at a comparable price.

One Response to A look back at whisk(e)y season, Part I