Thanks to Dinah over at Bibulo.us, who’s hosting this month’s round of Mixology Monday, I’ve been taking a sentimental stroll through some of the older — and newer (thanks to Mud Puddle Books) — cocktail manuals on my bookshelf, in search of the appropriate 19th century cocktail. And what I’m remembering is what has long delighted me about some of these older recipes: while many of them have relatively simple preparations (oftentimes a drink being little more than a base ingredient gussied up with the bibulous equivalent of a little powder and perfume), the flavors are sometimes spectacularly baroque, created with richly flavored spirits and elaborately crafted herbal liqueurs and aromatized wines.

That brings me back to two of my most favorite ingredients (and the punks at Mixoloseum can just stifle the chortling — yes, I’m going back to these topics again): absinthe and vermouth.

Both of these ingredients debuted in the U.S. in the mid-19th century, and both were welcomed to the mixological arena soon thereafter with a great degree of enthusiasm. Slightly bitter and richly floral, vermouth — we’re talkin’ Italian, or vino, vermouth here, which entered wide use several years before the French, or dry style — performed a mystical whazoo over many cocktails of the era, broadening and lending greater depth to flavors while letting primary spirits remain in the spotlight. And absinthe, with its tantalizing perfume of anise, fennel and mint, brought a gauzy dose of the ethereal to otherwise modest cocktails.

As cocktail ingredients, vermouth is today typically used in small amounts, and absinthe in quantities even smaller, but our ancestors — with their preference for engaging and even gaudy flavors — measured them out with much more gusto. In the 1870s, absinthe and vermouth were both in heavy use, and each had its namesake cocktail: the absinthe cocktail, with the potent spirit touched with bitters, sugar and sometimes anisette; and the vermouth cocktail, with vino vermouth brushed up with sugar, bitters and maraschino. While I’ve written about the absinthe cocktail before, the vermouth cocktail is another recent favorite — use a good vermouth like Carpano Antica Formula, and be sure not to dilute it too much, and it’s actually a pretty lively old girl. Similar recipes are in books ranging from Kappeler’s Modern American Drinks to Harry Johnson’s Bartender’s Manual to, of course, Jerry Thomas (the 1887 version).

Stir with ice, taking care not to overdilute, and strain into chilled cocktail glass. Hit it with a lemon twist, and garnish with a cherry, if desired. 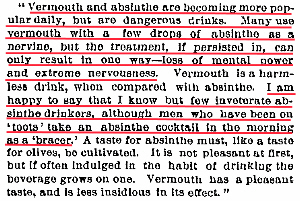 To my taste, some of the best uses of these ingredients are when they appear together — though such combinations raised warnings early on. In 1886, the Brooklyn Daily Eagle noted, “Vermouth and absinthe are becoming more popular daily, but are dangerous drinks. Many use vermouth with a few drops of absinthe as a nervine, but the treatment, if persisted in, can only result in one way — loss of mental power and extreme nervousness.”

I’m already the nervous type, so I won’t worry too much about combining absinthe and vermouth. As I mentioned recently, while absinthe and vermouth were the St. Germain of their day, showing up in pretty much everything, “The Only William” Schmidt had a particular fondness for mixing the two together (Schmidt even tossed a dash of absinthe into his recipe for the Vermouth Cocktail). I’ve covered the Weeper’s Joy and the Anticipation, both examples of the absinthe / vermouth combo; here are two others that caught my eye, from Schmidt’s 1891 book: the FrappÃ© Ã  la Guillaume, and the Appetizer Ã  l’Italienne.

Fill glass with crushed ice and frappe until very cold & frost forms out outside of glass. Serve with a straw. 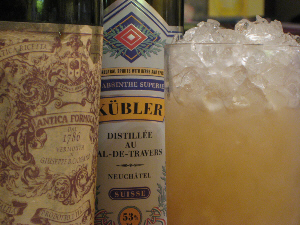 Essentially a typical absinthe frappe with sweet vermouth added, this is absolutely lovely — really, this tastes like the 19th century: deeply elegant, floral and (I’ll say it again) baroque, with the crisp edge of anise brushed into a rich lushness from the vermouth. I used Kubler, because it’s not bad and I had plenty of it on hand; for this, as with any classic drink that calls for absinthe, you’ll need a classic anise-forward spirit; other absinthe-type spirits that don’t have that anise character just aren’t suitable in any cocktail that predates the Internet. As with many other drinks that prominently feature vermouth, I used Carpano Antica Formula, because it just kicks ass. Vya may work as well, and even Cinzano, Noilly Prat sweet or Martini & Rossi would be suitable, but they don’t quite have the gumption of the Carpano or the Vya. Word is that Dolin should start appearing soon; I’ll reserve judgement on that until I’ve had a chance to try it. 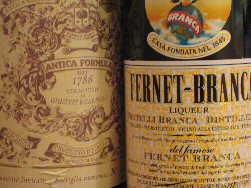 I took my first sip of this while still in the kitchen, next to the sink — to be perfectly honest, I expected to hate this. Fernet Branca, while a lovely thing on its own, is a surly prick in the mixing glass. It’s usually dispensed in small amounts as with many other bitter ingredients, but in this role it just works. With a base of sweet vermouth, it’s as though the Fernet doesn’t feel the need to compete: it can spread out in all its eucalyptus-tinged glory, without bumping into another alpha-dog ingredient. The absinthe is in no way prominent — I mean, with an ounce of Fernet Branca in there, how could it be? — but it lends that indecipherable seasoning quality, making the drink much richer and fuller than it would be without it. If you’ve got a bottle of Fernet kicking around and you’re trying to figure out what to do with it, here’s a good choice.

Anyway, that’s it for MxMo 19th century; head on over to Dinah‘s to see what else is up.