Except for occasional forays into the rumtacular world of tiki drinks, I’m ordinarily pretty skeptical about cocktails that have more than three or four ingredients. This is for a couple of reasons: As ingredients are added, there’s typically a point of diminishing returns, where the delicately flavored components are completely lost in the mix, and the more vibrant flavors start to clash or become muddied. Also — and this may just be a result of my diminishing brainpower as I creak my way into middle age — but if there are more than a few ingredients, I start to forget things while assembling the drink.

There are, however, exceptions to this rule, and here’s one I’m becoming quite fond of. Posted over at eGullet a couple of weeks ago, this drink was assembled by Phil Ward at Death & Co in response to a drink request from Avery Glasser, the mastermind behind Bittermens Bitters. Recognizing the horrific resemblance of this long list of complex-flavored ingredients to the gruesome spectacle of a car wreck, Phil dubbed this drink the Airbag.

What makes the Airbag so intriguing is its use of Batavia arrack as a featured ingredient. Arrack has a singular aroma and flavor that is at once ghostly and caustic, entrancing and offensive — there’s an alluring smokiness that encourages you to take a sip, and a sharp, serrated edge to the flavor that makes you feel like you just swallowed a knife fight.

But remembering that old Untouchables lesson — if they bring a knife, we bring a gun — Phil matches the arrack’s fire, throwing equally alpha-dog ingredients such as mezcal, Benedictine and allspice dram into the glass, creating a mix that — mediated by tequila and Carpano Antica formula vermouth (as if THOSE are restrained ingredients) — all balances out into a deep, smoky cocktail with layers of rich flavor that somehow, unpredictably, all work together. I don’t know if it’s because these ingredients complement each other in some bizarre alchemical way or if it’s because they’re locked in an eternal deathgrip like pitbulls clenched onto each others throats, but in this drink, the stalemate works. 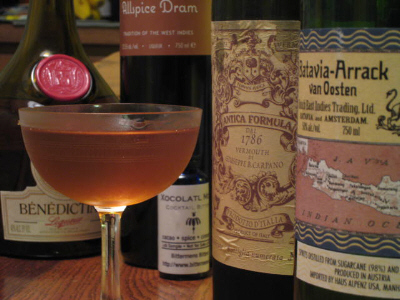 * Don’t have the Bittermens? In the short term, I’d suggest an aromatic bitters, but considering that Avery recently received TTB approval to produce the mole bitters, I’d suggest subscribing to Bittermens RSS feed and keeping your credit card ready for when they become available.

Lordy, that’s tasty. Scary as hell to contemplate while you’re pulling bottles out of the liquor cabinet, but very much worth the effort. If you give this a shot, chime in below and let us know what you think.

Smirk all you like, ye denizens of New York, San Francisco, London, and all the other cities rich with bars serving nothing but well-crafted cocktails — but how often do you wind up with a bartender on the front page of one of your city’s daily newspapers? Seattle can be a sleepy place at times,… END_OF_DOCUMENT_TOKEN_TO_BE_REPLACED

There are so many new food and drink sites coming online that it’s hard to keep up — while my online reading is mostly oriented toward spirits and cocktail-related blogs and sites (those, and news feeds to satisfy my political junkie side), the world of cocktail blogs has erupted so much over the past year… END_OF_DOCUMENT_TOKEN_TO_BE_REPLACED

I’m prone to exaggeration from time to time, but I say with all seriousness that the results of this round of Mixology Monday — hosted by Stevi at Two at the Most, with the theme Guilty Pleasures — may truly frighten me. But not for the uppity reasons you might expect from a card-carrying cocktail… END_OF_DOCUMENT_TOKEN_TO_BE_REPLACED

God, I love whiskey. That shouldn’t be surprising to readers of this blog, but I felt the need to point that out while packing for my trip to San Francisco, which will host its second annual Whiskyfest on Friday night. Created by the good folks at Malt Advocate and now swinging into its second year… END_OF_DOCUMENT_TOKEN_TO_BE_REPLACED