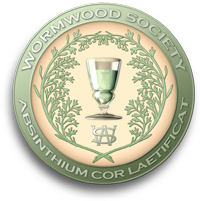 Once upon a time, there was a group called the Wormwood Society. With members scattered around the world but with a surprisingly large contingent in the Pacific Northwest, the group bantered online about the then-banned (in the U.S., anyway) spirit known as absinthe, wondering if it would ever again be legally available close to home. And from time to time — usually in Seattle, on Saturday nights following a great amount of housecleaning and the purchasing of bags of ice, party snacks and extra glasses — members of the group would assemble to sample many, many absinthes while plowing through the snacks and discussing, at length, why absinthe was so damn expensive when you had to order it from Europe and have it delivered by flying monkeys, and how much better it would be for everyone all around if you could just pick up a bottle at the goddamn liquor store. And a good time was had by all.

Oh, but that was years ago, and the last Green Hour — one memorable not only for its astounding length (I bailed after around 7 hours, but the party went on for at least 6 more), but for the fact that it took place right about the time that the first legal absinthe hit U.S. store shelves — was on Memorial Day weekend in 2007. Was that the end? Once the stuff could be found in any well-stocked liquor store, was there the need for another Green Hour?

Hell yes. And now, it’s here: this coming Thursday (no, not tonight), March 12, at 7pm, the Green Hour returns.

Taking place at Kathy Casey Food Studios in Seattle’s Ballard neighborhood, Green Hour XV will feature an open bar with absinthes including Marteau Belle Ã‰poque, Vieux Carre, St. George, and Pacifique (and probably more), plus absinthe cocktails both familiar and obscure, which will be mixed by myself and some guy who goes by the nom-de-booze Drinkboy. (Plus, there’ll be canapes, hors d’oeuvres, and a bunch of really nice people to talk to.)

Tickets are $35 per person, and — very important — need to be purchased by this Saturday, March 7 (UPDATED 3/7- DEADLINE EXTENDED!). There are about a dozen spots left, as of this morning, so grab ’em before they’re gone.

Buy your tickets here, and hope to see you there!

3 Responses to The Green Hour Returns!