, the drinks book that just keeps on giving more than a year and a half after the first reading, Dave Wondrich notes of the Prescription Julep, “It […] happens to be the tastiest Mint Julep recipe I know.” 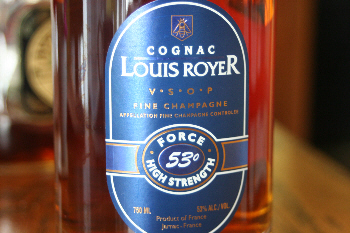 I’ve tested this theory before, found it sound and then moved on, but I’ve pulled out the recipe once again based on a comment Sam Kinsey made at eGullet a while back, regarding the preparation of a Prescription Julep using the Rittenhouse bonded (natch) plus the Louis Royer “Force 53” VSOP cognac. This sparked something in the murk of my memory: I had read somewhere of such a cognac being released in the U.S., one that pfffted at the typical 80 proof weigh-in for cognacs and instead was bottled at a bulked-up 106 proof — a heavily muscled bodybuilder of a cognac, particularly attractive for use in drinks like this because (as most regular readers surely know, but for those who do not) not only does the alcohol level affect the potency of a spirit, but that higher proof carries a more powerful flavor. To say that I was intrigued my Sam’s comment isn’t even the half of it.

Higher proof whiskies, rums and gins are fairly easy to find nowadays, but a high-octane cognac really grabbed my attention. After ordering a bottle online — what, you think the Washington Liquor Control Board is gonna stock it? — I commenced to try out the Force 53 in a Saratoga and, on Erik Ellestad’s suggestion, a Morning Glory, and was almost in tears at the richness of flavor in this spirit. 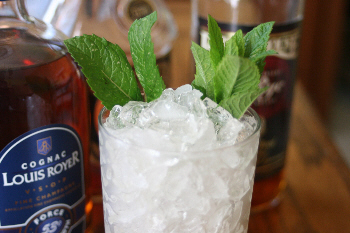 Tonight, however, it’s the final shot of 30/30, and I wanted to go out with a drink that’s devastatingly good, so I turned back to the Prescription Julep. I followed Sam’s suggestion of combining the Rittenhouse with the Royer, and to underscore Wondrich’s notation in the recipe, “Cognac and rye whiskey are a marriage made in heaven, the cognac mellowing the rye and the rye adding spice to the cognac.” That pretty much does it right there. I did step off of Wondrich’s recipe at two points, kind of: instead of doing the sugar / water muddle, I used gomme syrup as I have a metric buttload of it and am coming close to pouring it on my pancakes just to free up some space; and I incorporated the flourish, that while not common is certainly kosher when it comes to juleps, of dashing some Jamaican rum atop the finished drink.

I’m rapidly finishing this drink as I type up the post; god, this is lovely. C’mon, play along:

In a tall glass or julep cup, add your sugar & water and stir to mix (or add your syrup and proceed). Very gently press your mint leaves — for the love of all that is good, boozy and holy, do NOT grind them into a paste — and withdraw them if you like, or gently nestle them in the bottom of the glass. Add the cognac and whiskey, give a slight stir (again avoid that impulse to smash the shit out of the leaves — seriously, you’ll thank me for this), then pack the glass with fine-crushed ice. Give a few light stirs with a bar spoon to help raise the frost, add more ice, and festoon with a fresh mint sprig, for aromatics. If you’re feeling extra plush, dash a little Jamaican rum on top of the ice — Appleton Extra worked very nice for me. Straw, please.

I’d tag on some notation that I made it to the finale of the frequently fun but sometimes exasperating and stupid 30/30 project, but it’s a Saturday night, I’m enjoying the last of a fantastic drink and I’m kind of feeling like having some more, so I’ll hold on the ceremonies and folderol until tomorrow. Now, I’m in the mood for something else…..