I donâ€™t do that much anymore, for good reason: primarily because, thanks to folks like Eric Seed but also due to a groundswell of interest in these products, I donâ€™t have to. No longer am I pestering friends and colleagues to mule back a bottle of crÃ¨me de violette from Japan or ordering from shady-looking websites so I can lay in some pimento dram from Jamaica, and the longing to taste a Sazerac made with true-blue absinthe has long since been sated. True, thereâ€™s still no Amer Picon on the shelf of my local liquor store, but easy work-arounds exist, so itâ€™s been quite a while since Iâ€™ve found myself really stymied by a cocktail recipe that calls for something I canâ€™t lay my hands on. (That said, crÃ¨me de noyeaux seems like a pain to make and every version Iâ€™ve tried in the U.S. seems kinda crappy, so if anyone has a line on a supply of good noyeaux from France, please let me know.)

Arrack Punch, or Swedish Punsch, is still in the work-around category for now, but since itâ€™s traditionally a homemade concoction, you donâ€™t have to worry about authenticity of flavor. For the past couple of years, ever since Erik Ellestad passed along his recipe for our â€œMake Your Own Ingredientsâ€ session at Tales of the Cocktail, Iâ€™ve been working off batches of his early version of Underhill Punsch, made with a base of rum (usually Jamaican, though Demerara can be an interesting detour) pumped up with Batavia arrack, the booze briefly infused with sliced lemons and sweetened with a syrup made with sugar and tea spiked with cardamom. Easy, easy.

But my bottle of homemade Swedish punsch recently ran low, right about the time that David Wondrichâ€™s new book, Punch: The Delights (and Dangers) of the Flowing Bowl

arrived in the mail. Iâ€™ve got a longer write-up of Daveâ€™s book planned, complete with recipes for the punches I drank too much of at his Seattle book party on Tuesday night. But one of the recipes that caught my attention while reading the book was one of the simplest and most familiar, in a way: that for Cozzenâ€™s Arrack Punch. 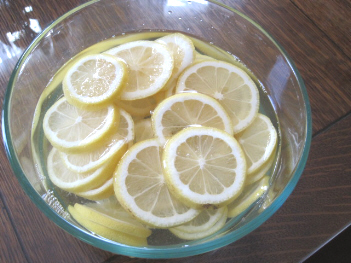 The mixture is simply a version of Swedish Punsch, made much in the same way that Erik does but with a couple of minor tweaks. First off, the flavor flourishes are eliminated — no tea appears in the syrup recipe, nor is cardamom or any other spice part of the equation. But, before you start thinking this version is going to be too boring, take a look at the liquor: thereâ€™s no rum to soften the edginess of arrack, so the primary flavor thatâ€™s coming out of this punch is that of unedited arrack. The recipe Wondrich cites is from F.S. Cozzens, and it appeared in Wine Press in June, 1854. The version he lists makes 8 cups of punch; I cut the recipe in half, since I donâ€™t go through it all that fast (plus, I used up all the Batavia arrack in the house); hereâ€™s the smaller version:

Thinly slice the lemons and let them soak in the arrack for 6 hours. While you wait, make a syrup by combining the sugar and water over medium heat, whisking until the sugar is completely dissolved; let the syrup cool before using. At the end of the soak time, gently strain the fruit from the liquid, taking care not to press or crush the fruit or do any of the other things youâ€™re accustomed to doing when removing fruit from an infusion. Combine the syrup with the infused arrack and store in a jar. After a few days have passed, filter the punch for particles and sediment, then bottle and store.

Yes, itâ€™s sweet, but thatâ€™s the point — youâ€™re basically using this as a liqueur (or, if serving it on its own, youâ€™re diluting it down so the sweetness is more manageable).

Anyway, now that youâ€™ve got this stuff lying around, hereâ€™s a fine drink in which to use it: the Diki Diki.

This drink first popped up in Robert Vermiereâ€™s Cocktails: How to Mix Them, which was first published in 1922 (I wrote an introduction for the reprint version of this from Mud Puddle Books, which came out in 2009). As Vermiere explains, 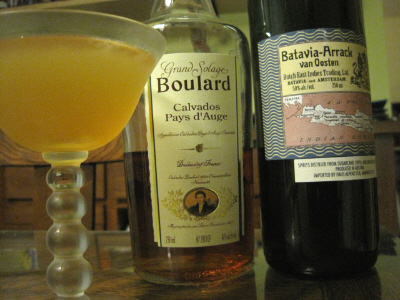 Vermiereâ€™s recipe for the Diki Diki follows the classic 2:1:1 ratio of spirit:citrus:modifier. This version is bumped back a little bit in the Savoy Cocktail Book, where it appears as a 4:1:1 ratio. These are both pretty tasty ways to go, though I think I prefer the Savoyâ€™s version, which lets the Calvados remain at center stage. But my favorite version of the Diki Diki is from the 2009 revised edition of Vintage Spirits and Forgotten Cocktails

by Ted Haigh, the original edition of which Iâ€™ve raided many, many times for this blog over the years. Hereâ€™s Docâ€™s version:

I really, really enjoy this drink. First, Calvados has a robust quality that carries over well even with sours; it gives the drink some gravitas, without being overwhelming or uncomfortable in the role as big-character whiskies can sometimes be. Between the grapefruit and the punch, thereâ€™s a complex ranginess in the drink, with the raw, gamy quality of arrack just barely held in check, where it can throw little barbs of funk into the drink without being offputting. As Josey Packard said when Erik mixed one of these with her, the Diki Diki is a very grown-up drink — this isnâ€™t really for a novice, but at the same time itâ€™s not quite as out there as some of the drinks making the rounds nowadays.