Before I even asked Jim Romdall from Vessel if heâ€™d let me rip off a couple of his recipes for this month-long blog frenzy, I knew whatever drinks he prepared would have some ingredient guaranteed to freak out about 90 percent of the drinking public. I mean, look at the facts: the manâ€™s Twitter handle is @ardbegfloat, he entered a cocktail in a vodka contest that mixed the obnoxiously toothpaste-esque 42 Below Feijoa with (if my fuzzy memory serves) green Chartreuse and Bowmore (and actually made a pretty interesting drink out of it), and whoâ€™s been known to deploy both absinthe and Caol Ila in a gin-based cocktail.

Jimâ€™s also a good sport and even after I told him that these drinks were to be featured on a blog, and not in print or anything real or sexy like that, he still played along. And while I was a little disappointed that no Islay malts made their way into the mix — really, I was fully prepared to exit Vessel smelling like my coat was on fire — Jim did indeed go there with the buckets-of-knuckles ingredients, preparing both drinks with Fernet Branca, and one of them with white dog.

Hereâ€™s where he went:

Combine everything except the bitters in a cocktail shaker. Dry shake for a good 10 seconds to work up the egg white, then add ice and go at it again. Strain into chilled cocktail glass; drip Angostura atop the foam and swirl it into pretty pictures if thatâ€™s what you like to do with your time. 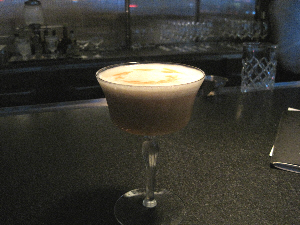 Jim actually prepared this for me using Calvados, which was an interesting detour but as he said and I agree after trying the drink again at home, you really want the soft, fruity richness of grape brandy for a platform upon which the Fernet and the citrus can play.

Speaking of the Fernet: as anybody whoâ€™s ever mixed a drink with it knows, putting Fernet Branca in a cocktail shaker with other ingredients can be the rough equivalent of feeding crystal meth to a pit bull and putting it in a room full of bunnies: the results are bloody, messy and frighteningly savage. There are a few things that can partially defang Fernet, though; one, as Iâ€™ve mentioned, is a whopping dose of vermouth, but others include egg white, which helps soften and spread out the bitter impact, and citrus — well, the citrus is like distracting the tweaking dog by hitting it with a pillow while the surviving rabbits run for cover: it doesnâ€™t so much soften the Fernetâ€™s bite as much as it provides another aspect of the drink that keeps the liqueur from fully dominating. Anyway, as might be expected, this is a big, bold, gnarly drink, but still pretty appealing if youâ€™re into big, bold, gnarly things.

Vessel is right next to the 5th Avenue Theatre, and right now, as the holidays approach, the theater is featuring A Christmas Story: The Musical, based on the â€œyouâ€™ll put your eye outâ€ movie from the 1980s. In case youâ€™ve somehow missed catching the movie during the holiday-season heavy rotation itâ€™s enjoyed on television over the past quarter century, thereâ€™s a key scene near the end involving a Christmas turkey and a pack of the neighborâ€™s dogs. Always one to support the next-door theater as well as to celebrate bad behavior on the part of animals, Jim created the next drink in their honor.

Put ingredients in a mixing glass and yadda yadda if youâ€™ve been to this blog before you know what to do. Up, cocktail glass, orange twist. 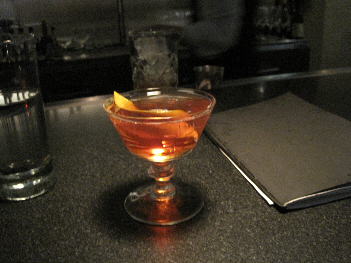 Jim initially tried this with an ounce of Headlong White Dog from the Woodinville Whiskey Co., which is made using a rye-free bourbon mashbill, and the new spirit was just too soft and sweet for this drink, so he started over with Wasmundâ€™s Rye Spirit, cutting the dose back to 1/2 ounce compensate for the potency of this cask-strength raw whiskey (Jim says heâ€™ll be using Corsair Wry Moon should this drink go into the regular rotation). If youâ€™re playing along at home and donâ€™t have any of these spirits, another (still somewhat obscure and kinda pricey) option is to use Old Potrero 18th Century Style Whiskey, which is all rye, cask strength and very lightly aged.

Now this is something. The drink is basically a Toronto Cocktail with additional gaminess provided by the young whiskey. I have to confess to a bit of white-dog fatigue; sure, itâ€™s interesting stuff, but I rarely find myself actually wanting it in my glass. But in this drink, the young whiskey really plays a good role: it takes the potency of flavor thatâ€™s so engaging in a Toronto, and adds another dimension, giving the drink a new identity. The young rye also lends support to the base of aged rye, waking up the whiskeyâ€™s flavor, and in the process it erects an obstacle to keep the Fernet from stealing the show.

Anyway, thanks to Jim Romdall for playing along with my little blog project. Go see him at Vessel and buy a bunch of drinks.