It’s been a while since I’ve fully visited the range of drinks that were variously known as corpse revivers, fog cutters, gloom chasers and what have you — regardless of the moniker, the drinks that were designed to be consumed at a relatively early hour to dispel the effects of a long night before.

, now poised to retake the bibulous world in an expanded edition — the corpse reviver category has (sorry) returned from the dead. Somewhat, that is.

For there to be a #2, there has to be a #1 — but as with many freshman efforts, the initial entry into the category (at least, the one that was dubbed #1 in 1930s bar manuals by Harry Craddock and Patrick Duffy) has been overshadowed by its more illustrious successor. In the case of the Corpse Reviver, this is as it should be — while version #1 is certainly nothing to sneeze at, it lacks the delicacy of the #2; plus, if the directions are followed to the letter, it’s an ass-kicker. Let’s take a quick look —

Stir well with ice, strain into chilled cocktail glass. Hit it with a lemon peel, if you like.

Short, sharp and strong — not bad, but nothing that remarkable. No wonder it faded. 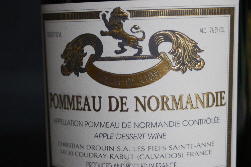 But, a year or so back, I was served a variation on this drink by Jamie Boudreau. Jamie freshened up the CR1 by using pommeau de normandie in place of the apple brandy; this reduced the alcohol level of the cocktail, making it a bit more managable, while also bumping up the fruitiness factor without adding extra sweetness. Rounded off with peach bitters and Angostura, and the Corpse Reviver #1 had a — sorry again — new lease on life. Here’s Jamie’s version, the Naramata:

Stir well with ice, strain into chilled cocktail glass. Flame an orange twist over the drink and use as garnish. 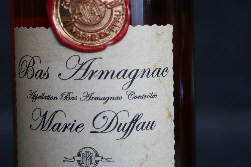 I tried a few versions of this drink; while the impulse is always there to reach for a premium vermouth like Carpano Antica, it most assuredly does not work in this cocktail. The Antica has such a strong flavor that it overwhelms the pommeau; instead I used Martini & Rossi as it’s my workhorse sweet vermouth, and it seemed to work well in this drink. Also, I eschewed the cognac recommendation and instead went with Armagnac, reasoning that the more rugged, earthy flavor could lend an interesting angle to the drink. I doubt I could tell a Naramata made with cognac from one made with armagnac in a blind tasting, but the Armagnac did its job well and I have no complaints.

Anyway, this is another drink I’ve been thinking about for a long while, dusted off for the new millenia.