Itâ€™s Friday at the end of a busy week, in the middle of a busy month. Complexity is not what Iâ€™m looking for in terms of drink preparation right now; lots of flavor, sure, and Iâ€™m still ready to do the basic shaking and measuring and whatever the hell I have to do to get a decent drink in front of me, but on Friday evenings I donâ€™t really feel ambitious enough to make syrups or drag a half-dozen bottles out of the liquor cabinet for one drink.

I also donâ€™t feel ambitious enough to go into a long, elaborate post about all the crooked crannies of complicated drinks, and I doubt youâ€™re much in the mood for reading 1,000-word blog posts about a couple of cocktails, so letâ€™s get right to the point: here are two whiskey drinks in the sour vein that Iâ€™m enjoying quite a bit these days.

Combine whiskey, lemon and sweetener in a cocktail shaker and shake with ice. Strain into an ice-filled rocks glass or a chilled cocktail glass. Carefully pour the wine over the back of a bar spoon so it forms a neat layer atop the drink (if you like, especially if youâ€™re serving the drink straight up, you can chill the wine first by putting it in a mixing tin and placing that tin inside a larger glass or tin filled with ice). 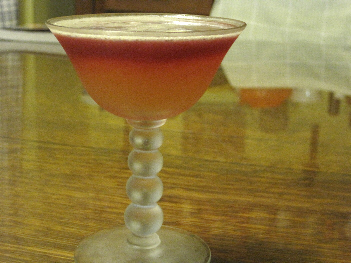 Nothing new about this one — as David Wondrich write in Imbibe!, the drink was making the rounds during the 1880s, sometimes known as the Continental Sour or the Southern Whiskey Sour, but the New York Sour sobriquet stuck to it around 1900 (though Iâ€™ve also seen this on menus as a Greenwich Sour, and in books as a New York or New Yorker; shrug).

Thereâ€™s also no surprise about why this is in my current rotation: itâ€™s a tasty goddamn drink. I mean, look at it: itâ€™s just a basic whiskey sour, a drink so classically awesome that it can do pretty much everything except explain to your wife why you’ve been out until 3am, topped with a float of red wine, which has the whiskey’s back and makes what would otherwise be a humble cocktail into something comfortable around high-class company. It looks great, it tastes fantastic, and if your kitchen is anything like mine youâ€™ve probably already got all the ingredients. What more do you need?

Well, besides a second round: hereâ€™s another whiskey drink that Michael Bauer wrote up not too long ago for the San Francisco Chronicle: the Rattlesnake, from Beretta in San Francisco.

Combine ingredients in a cocktail shaker and shake well, without ice, until the egg white is good and foamy, about 10-15 seconds. Add ice and shake again another 10 seconds; strain into chilled cocktail glass. Prepare your broad twist of lemon and go in for the kill.

Again, easy as hell: a whiskey sour with maple instead of simple, rendered old school with the egg white, and with a little bitters because what the hell, Peychaudâ€™s is welcome at pretty much any party you can come up with. The drink comes out edgy and alluring (especially if youâ€™re using a higher-proof rye like Wild Turkey or Rittenhouse bonded), with enough oaky darkness from the whiskey to beat off the richness of the maple and the acid from the lemon. The twist finish is somewhat unorthodox for egg-white drinks, but it works; the lemon oil winds up suspended on the drinkâ€™s surface for way beyond the first sip, so the heaviness of the rumble going on beneath the foam is never allowed to fully take over.