This week was the start of school here in Seattle, which means that promptly at 9:15 Wednesday morning I hustled my offspring through the doors of their elementary school and — while their new shoes were still squeaking in the hallways and before theyâ€™d had a chance to lose a backpack or a lunch box — I was on my way back home to enjoy the first uninterrupted work week (a three-day one, at that) Iâ€™ve had since June. So of course, Iâ€™m spending part of it blogging.

I guess â€œof courseâ€ isnâ€™t entirely correct, considering how little attention Iâ€™ve given this site of late. But while my recent days have been filled more with driving my kids to play dates than with tinkering with cocktail ingredients, it hasnâ€™t been a dry summer. And on the days that passed for sweltering here in the Pacific Northwest, more often than not Iâ€™d find my thoughts drifting in the direction of punch.

Part of this desire for tall, frosty glasses of drinks both potent and voluptuous could be due to the impending release of David Wondrich’s new book

that covers the topic in depth — a priming of the palate, as it were, in anticipation of the rigorous experimentation the book will no doubt incite — but thereâ€™s more to it than that.

Yâ€™see, in case you havenâ€™t noticed in this whole cocktail renaissance thatâ€™s been under way for some time, thereâ€™s been a great deal of emphasis placed on precision, nuance and the ideal of esoteric ingredients. God knows Iâ€™ve done my part to push this whole thing along, but recently — and Iâ€™m certainly not alone in this — itâ€™s all begun to seem a bit much. While I can still bore a bystander to tears when chatting with another cocktail geek, Iâ€™ve been at the point for a while where I honestly donâ€™t give a shit about all the dogma and detail anymore. For all the heated debate about historical ingredients and the true origins of certain old classics, ultimately these are just drinks weâ€™re talking about — theyâ€™re just fucking drinks. By getting too caught up in rigid formulae and absolute rules, we as a generation of drinkers are at risk of missing the most essential point: a drink is made for simple enjoyment, and different drinks please the drinker in different ways. And for me, with the whole sloughing off of rigidity and relaxing with things that simply taste good, few drinks fit the bill better than old-fashioned punches.

When you look at some of the old punch recipes — and here Iâ€™m talking about the single-serving punches of the sort that populate the old tomes of mixology, most notably Jerry Thomas’ book

— thereâ€™s a certain â€œoh, what the hellâ€ nature to them. Sure, theyâ€™re compounds of spirits, juices and other ingredients that all taste good together; but thereâ€™s also a carefree aspect to them. The Brandy Punch is a fine thing, but if youâ€™re not in the mood for a cognac-heavy mix redolent of raspberries? No problem — Thomas has got you covered, and you can mix-and-match other ingredients to find a drink that does suit the bill. Punch is also forgiving, and for someone fatigued with the precision required for many high-falutinâ€™ cocktails, this is a good thing; a splash this way or that of syrup or citrus wonâ€™t damage the drink, just give it more personality once itâ€™s in the context of all the other ingredients.

Anyway — while this summer I worked my way through various manifestations of Gin Punch, Whiskey Punch and Brandy Punch, it was in the offshoots where I found my happiness; hereâ€™s one drink I came to enjoy: West Indian Punch.

The recipe is from Jerry Thomas

, though it first came to my attention in Wondrichâ€™s Imbibe!

The punch starts with the formula for a Brandy Punch, but has a couple of diversions that attracted my interest. First, the cognac is knocked down from 3 to 2 ounces, and an ounce of rum (I used a buttery Cockspur, from Barbados) is substituted; as a longtime sucker for drinks mixing cognac and rum, I couldnâ€™t resist this version. Additionally, the raspberry syrup that sweetens the Brandy Punch is eliminated; instead, the sugar is bumped up a tad and additional sweetness, and a dose of spice, comes with a scoop of preserved ginger in syrup â€“ and since Iâ€™m also a sucker for the bite of ginger, this drink had my name written all over it. 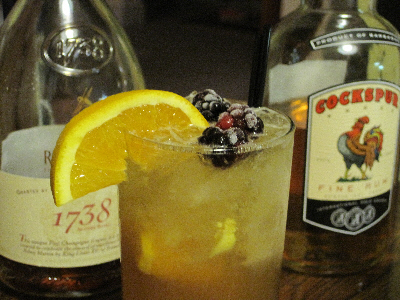 A couple of points on preparation: Wondrich notes that shaking the drink (with the bits of orange and pineapple involved) can result in a mushy mess. Agreed â€“ I followed his suggestion of preparing the drink with crushed ice and then rolling the mix between the halves of a shaker, which keeps the fruit more-or-less intact. Also, for a good delivery of pineapple-ey goodness, Iâ€™ve substituted pineapple gomme for the simple syrup when the mood has hit. And since preserved ginger doesnâ€™t have quite the intensity of bite Iâ€™d like, Iâ€™ve taken to supplementing it with a few slices of fresh ginger, just tossed into the mix (and why do I continue to use the preserved ginger, then, if I find it lacking? Because I bought the whole damn jar and Iâ€™ve got to use it somehow). Finally, Thomas calls for two ounces of water in the mix, to soften the drink from sour to punch territory; I add this at the end, in the form of chilled club soda, just because I like bubbles.

Garnished with a few blackberries picked last month and kept whole in the freezer, this is my closing drink of summer.

, with suggestions from David Wondrichâ€™s Imbibe!

Combine ingredients in a mixing glass, stirring the syrups with the citrus and booze until well mixed. Add about a half-cup of crushed ice and roll between the glass and a mixing tin several times. Pour unstrained into a tall glass; add about 2 ounces chilled club soda and additional ice to fill. Garnish with an orange slice, berries in season, a pineapple stick or whatever the hell you want. Straws, gentlemen.

9 Responses to What I Drank on my Summer Vacation, 2010 edition