Alright, itâ€™s the night before Thanksgiving, so Iâ€™m gonna make this quick (and Iâ€™m also going to take High Turkey Day off from the 60/30 project, then toss in two more drinks over the weekend to make up, just because I can).

About a year ago, as we were descending once again into the holiday season, I became enamored with brandy-based cocktails. Iâ€™d always been something of a fan of the brandy realm of mixology, and old-school Brandy Crustas and East India Cocktails satisfied me in ways that many other base spirits and cocktails just couldnâ€™t. But brandy drinks can be clunky; as I mentioned in passing in a piece on California brandy I wrote for the San Francisco Chronicle last month, cognac and similar brandies have a real or implied sweetness about them; as a result, drinks made with these spirits take well to the drying qualities of citrus, but in spirit-forward drinks itâ€™s quite easy to slip into the trap of making a cognac cocktail too cloying. There are alternatives, of course — Armagnac is usually earthier and drier, and has a good backbone as a cocktail ingredient, and then there are California brandies such as Germain-Robin, which I wrote about earlier this week — but for cognac-cocktail fans such as me, what other paths are there to follow?

Fortunately for me at the time, Murray Stenson at Zig Zag CafÃ© was already on top of that question. I was in the habit for a few weeks of having a very simple drink made with cognac, Root liqueur and bitters, which is way more of an alluring mixture than it has any right to be, but one night Murray asked if Iâ€™d like an Epicurean — a drink I couldnâ€™t recall ever coming across.

Murray is largely a proponent of the David Embury school of mixing, and not surprisingly the Epicurean came from Emburyâ€™s The Fine Art of Mixing Drinks

. I havenâ€™t done a careful sort through the library, but a casual breeze through a few books and a few minutes of stray Googling didnâ€™t turn up any other citations for this drink. Pity, that — Iâ€™ll admit the recipe doesnâ€™t look that exciting on paper, simply a 2:1 mixture of brandy and dry vermouth, with a modifier of kummel liqueur and a dash of bitters. I could be just biased about this, but the mix of aged spirits and dry vermouth has rarely taken me anywhere Iâ€™d like to go again, and while I find the caraway/cumin flavor of kummel interesting in an academic kind of way, itâ€™s rarely a flavor I find myself really jonesing for — unlike certain other spirits writers, who manage to work it into all kinds of things. 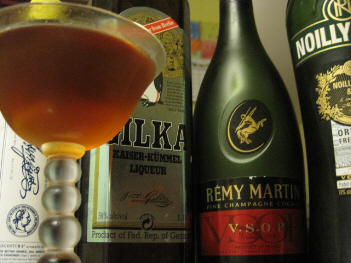 But somehow in this drink, the things Iâ€™d ordinarily think of as negative characteristics in dry vermouth and kummel in a brandy context — vermouthâ€™s flattening powers with the light floral flourishes, so nice in gin drinks but distracting with aged spirits; and kummelâ€™s sonorous savory notes, which seem to be dressed in out-of-fashion clothes and come across as stuffy and awkward next to the elegant delicacy of cognac — manage to cancel each other out, mostly, leaving a drink that still has the plushness of brandy but is streamlined, with little pops of spicy filigree out at the edges of the palate.

Anyway, the Epicurean: check it out.

Stir well with ice, strain into chilled glass. Embury doesnâ€™t call for it, but a slender wisp of lemon zest emancipated from the fruit and sent, with a quick twist, into the depths of the drink, certainly isnâ€™t a bad idea.

Of course, once I started thinking about dry vermouth and kummel, the immediately obvious drink to pop up on the radar is the Allies Cocktail. This drink appears in The Savoy Cocktail Book

) of kummel, essentially a wet martini with the spiced liqueur in place of orange bitters. And as to its name, story goes (which I canâ€™t seem to find right now — help on a source for this, anyone?) that the ingredients — English gin, French vermouth, Russian kummel — represent the Triple Entente at the outbreak of World War I. Of course, the only kummel Iâ€™ve seen around lately is Gilka, from Germany, which kind of screws that whole thing up, so maybe best not to play up that story too much.

Anyway, the Allies has made the rounds of the cocktail guides and Internet searches way more than has the Epicurean. Which is one more example of a mediocre drink trumping a middling-to-good drink, for no discernable reason whatsoever. Not that the Allies is bad, not in any way — indeed, if youâ€™ve got some kummel kicking around, whip out one of these (I vote with Embury on the tight-fistedness with the kummel); it has the lean brutality of a dry martini, with that little extra something thatâ€™s sometimes fun to have in the glass, like the brightness of orange bitters or the casual savagery of a little absinthe; the kummel adds a little archaic-yet-endearing Sally Bowles edge to the drink, which isnâ€™t something you might want all the time, but when you want it, it works.